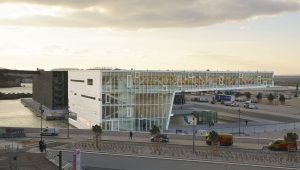 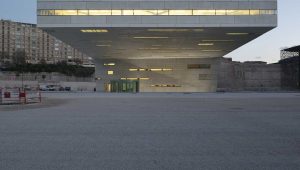 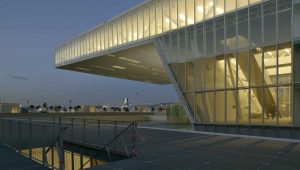 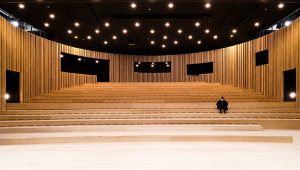 To mark the nominating of Marseille as European Capital of Culture, in 2013 the Villa Méditerranée was inaugurated as a place of interaction between the different identities that come from the sea.
The building stands on the coast near the port with the promontory of La Tourette behind it and rises from a square of water that penetrates the quay, symbolizing the deep bond with the sea and which is only visible once having entered the building. Seen from the promontory the building seems to rise up from an island while when viewed from the sea it gives the impression of resting on the mainland. The shape of the architecture is characterized by an imposing 36 metre overhang that in addition to overlooking the square seems to want to extend its projection over the breakwater. However, the Villa Méditerranée is not trying to overcome the sea but rather to envelope it as revealed by the longitudinal section which demonstrates the existence of two underground levels.

The structure, created from a combination of concrete and steel, is covered by a single skin, almost a continuous band that covers the vertical and horizontal surfaces indiscriminately thus recreating two very different elevations. The fronts relate to different portions of the surrounding landscape and they use a diversified and specific language to do this: while the facade facing the city is sober and elegant, the side towards the sea is radically modernist.
The cladding is made of concrete slabs alternating with sheets of glass in an interplay of contrast between heavy and light. Depending on the position of the glass panels, the view from the interior changes: when these are on the wall, it is possible to see the sea or the city while if they are placed on the floor or ceiling, the view is turned towards the square of water. Similarly, the side fronts are created using large glazed sections which are regularly interrupted by the insertion of opening windows.

The interiors are carefully designed to generate flexible spaces able to accommodate a wide range of functions. The entrance hall is very large and characterized by a complex sequence of stairs: the mobile ones lead to the upper floors, while a helical one leads to the auditorium in the basement. The space is also connected to the aquatic square through a further vertical connection, which manifests itself on the outside like a glazed cylindrical volume. The large open space on the top floor, low and wide, tapers in height focusing attention on the long strip window which offers a privileged viewpoint from which to observe the movements of the port.