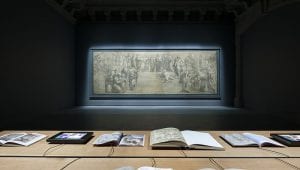 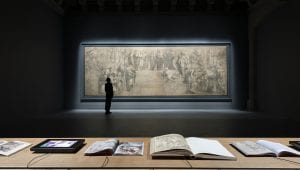 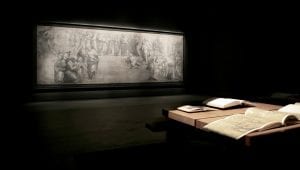 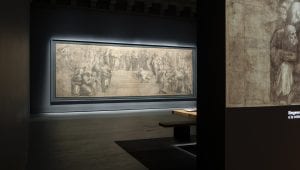 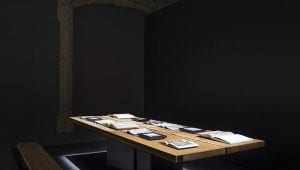 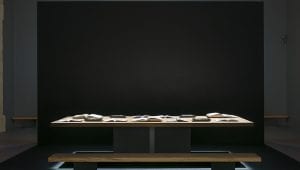 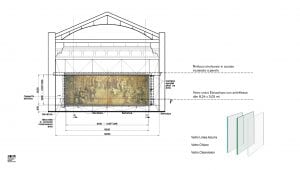 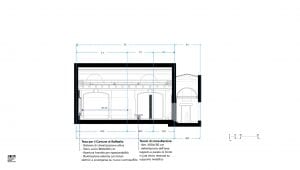 Superintendent for Archeology, Fine Arts and Landscape for the Metropolitan City of Milan:
Arch. Antonella Ranaldi

Promoter:
RaMo S.p.a, by the will of the founder Pino Rabolini. Thanks to Alessandro Rabolini, Raimondo Latini,
Alessandro Nitti.

Stefano Boeri Architetti designed and created the display set-up for Raphael’s Cartoon Room in the Pinacoteca Ambrosiana in Milan. After four years of restoration, the preparatory cartoon for the fresco of the Athenian School – a work located in the Vatican Museums’ Stanza delle Segnature – is now back on display after a number of long and painstaking interventions coordinated by internationally renowned experts, university centres and restoration studios. The new room, open to the public from 27th March 2019, has been designed to host Raphael’s preparatory work and all the staging options, starting from the sequences of approaching the great sketch itself, have been designed to prepare the public for the viewing of an intact work that contains an admirable conjunction of meanings while being at the same time both a finished work in itself and yet one destined as preparation for a larger more conclusive one. The staging project was conceived to immediately maximize the environmental comfort of the work in order to guarantee its conservation over time, as well as enhancing it in its entirety and complexity. The presence in the same room of a large solid oak table makes it possible for the visitor to consult a collection of texts and documents intended to allow an in-depth understanding of the history of the piece, its physical manufacture and its creation.

The intervention maintains elements of continuity with the previous installations by Luigi Caccia Dominioni in the 1960s and Griffini in the 1990s, including the position of the Cartoon on the West wall and a filter wall before arriving at the work, although having radically changed the styles of perception. The space is essential, with dark colours and opaque materials, in order to protect the masterpiece and prevent deterioration: the light is reduced to a minimum, guaranteeing values equal to 25 lux, equal to the lighting parametres necessary for fragile works of art like that produced by Raphael. The cartoon he created is the largest ever seen (measuring 2.85 metres by 804 centimetres). It arrived at the Ambrosiana in 1610 and returned, after changing hands several times and various other misadventures, only in the 1960s.

At the end of its long restoration, coordinated by a prestigious Scientific Committee comprising the Collegio dei Dottori of the Ambrosiana Library and experts from the Higher Institute for Conservation and Restoration, the Vatican Museums, the Superintendency of Milan and the “La Venaria Reale” Conservation and Restoration Centre, the masterpiece has been inserted in a new display case which is made up of an imposing protective glass sheet of the same size as the work itself (8 metres wide by 3 metres high giving a total surface of 24 square metres), and is the largest single-door showcase in the world. The double sealed glass plate underwent two fundamental treatments: the first was anti-glare and extra-clear in order to allow the best possible vision for the public; the second was anti-ultraviolet rays to avoid deterioration of the 210 sheets that make up the work. The display case was also designed to maintain constant humidity parameters in order to protect the Cartoon for as long as possible and can be opened in order to be able to inspect the work and to adjust its tensioning via an aluminium and wood frame.

The only counterpoint to the “Ben Finito Cartone” which was carried into the room through a slot in the side façade of the Pinacoteca, is the didactic table created in collaboration with Riva1920. Made from solid oak wood obtained from a single 150-year-old tree trunk cut into two 4-metre-long tables and mounted on a burnished iron base, it is able to transform room 5 of the Pinacoteca Ambrosiana into a silent and powerful school, where the public will be able to alternate viewing the cartoon and reading the historical texts that explain its origin, history and profound significance. If it has waited for half a century to be cleaned up, liberated from the dust and the frame that induced potentially ruinous creases, the set up today aims to offer a masterfully preserved treasure thanks also to the fact that it was never really used for the preliminary sketch, but only to bring the master’s images onto another cartoon which sadly has now been lost.