A Dead Forest for the Trojan Women 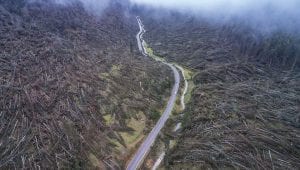 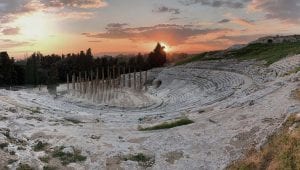 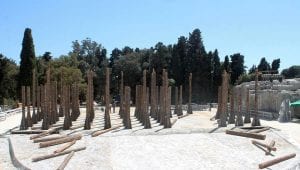 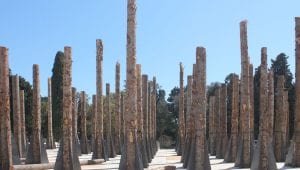 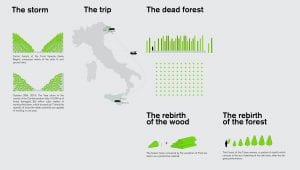 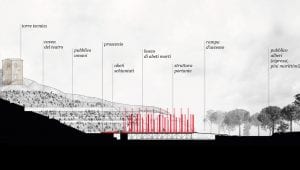 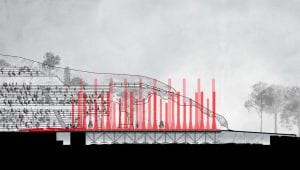 The stage design for Euripides’ tragedy the Trojan Women set against the striking backdrop of the Greek Theatre in Syracuse is presented more like a landscape or an ecosystem than an architectural presence. However the nature presented on stage is neither lush nor picturesque, but devastated and devastating, consisting of a forest of tree trunks without leaves or branches. The intervention that makes its debut on the ancient stage brings the contemporary message of the tragedy with it, a message that is perennially obvious and true: all wars bring destruction, are useless and frequently have neither real winners nor real losers, no matter what the opinion of the parties involved are.

The Dead Forest takes the idea of ​universal anti-militarism to a higher level, rising above the struggles between human beings to focus on the often conflictual relationship today between the human species and the natural environment. In actual fact the idea behind the project stems from the need to create using the tools of culture and design a bridge between two tragedies 2,000 years apart and two regions 1,500 kms away from each other, namely Friuli Venezia Giulia and Sicily.

The Dead Forest appears on the stage in contrast to the living trees in the landscape behind, in memory of the millions of fir trees felled on 29th October 2018 by Storm Vaia that hit the Carnic forests in North-Eastern Italy. The economic and environmental impact of the devastating gale that destroyed an area of ​​41,000 hectares of woods has yet to be calculated, but rough estimates show that the amount of lumber, blown down by the most violent gusts of wind that this area has ever seen, is 7 times higher than the combined quantity of material that  Italy’s sawmills normally process in a single year. The trunks of the fir trees thus become the leading characters of the scene by entering into constant dialogue both with the human spectators seated in the theatre’s auditorium, and the audience of cypresses and maritime pines located in the other direction, giving equal importance to both. According to the vision of the director Muriel Mayette-Holtz, the Trojans are among us with the appearance of refugees who flee from destruction and wars in their countries of origin in search of a better future by crossing the Mediterranean. They are confused and disoriented victims of terrorist attacks.

The setting features an extremely regular layout that on one hand recalls the perfect proportions of the classical Greek temples while recalling the archetypal column on the other: this regularity is brutally compromised by the violence of the wind that creates a path of blown-down trees thereby breaking the sacredness of the “temple” and bringing a feeling of anxiety and instability onto the scene. 250 trunks, 4, 5, 6 and exceptionally up to 8 metres high create a forest destined to be a refuge and a prison for both the protagonists and the choir, making it look exactly like the city of Troy as it appeared thus to its widows and orphans when defeated. The actors are anonymous, the Greeks and the Trojans as well as the entire stage are covered with the dust of the wreckage of war: they are still alive but the prologue predicts a painful end for both slaves and masters, giving both the same appearance as walking dead.

However, the show leaves the audience with a message of hope: it is in fact the task of each individual to decide whether human presence on the planet must necessarily be devastating or whether a more constructive attitude is possible.

At the end of each performance, the fifty actors involved distribute small holm oak trees to the spectators to be planted in a specific area on the outskirts of Syracuse, already chosen by the local administration. In this way the three lives of the Forest, namely the prologue, the main scene and the epilogue are narrated. The first is in memory of the spruce forests of the Carnic PreAlps destroyed by the storm; the second consists of the journey, the staging of the dead trunks and their transfer as a gift to the Sicilian timber industry as production material while the third is a symbol of a new rebirth. The final gesture, in fact, becomes the tangible confirmation of the minimum effort that each individual can make thereby creating a real difference: after 20 performances the 50 people involved will have been responsible for the planting of a forest of 1,000 trees for their city. The Trojan Forest.