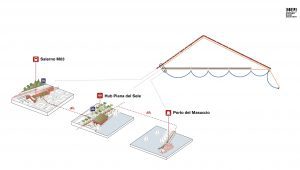 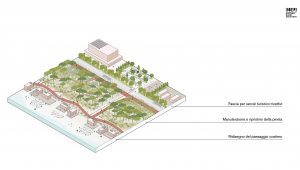 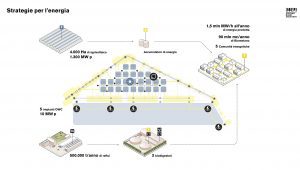 The competition issued by Regione Campania for the project of the Coastal Masterplan for South Salerno, won by  Stefano Boeri Architetti and Società Cooperativa MATE, together with StudioSilva and F Tourism & Marketing, is part of the global vision of redevelopment of the Campania territory. Together with the previous experience on the Domitio-Flegreo littoral, the plan aims to enhance and rethink a complex coastal territory that holds a great landscape and environmental value.

The project foresees the intervention on 8 municipalities (Salerno, Pontecagnano-Faiano, Bellizzi, Battipaglia, Eboli, Capaccio-Paestum, Agropoli and Castellabate), on a total of 478 square kilometers, in a territory characterized by a strong historical and naturalistic imprint thanks to the presence of archaeological sites – such as Paestum and Pontecagnano – as well as areas of environmental value, such as the Parco del Cilento and the Piana del Sele.
At the same time, the project area shows serious weaknesses mainly related to exploitation and erosion of the coastline, together with a framework of building abuse and poor maintenance that characterizes the littoral and coastal landscape. In addition, agricultural and river areas are largely (about 3,600 hectares) covered by greenhouses, a strong economic resource but also a deep criticality, due to the almost total soil sealing. The plan focuses also on other elements such as abandoned areas and river stretches polluted by wastewater from livestock farms.

The preliminary project, therefore, aims to revive the section between Salerno and Castellabate from an environmental and touristic point of view, with a framework characterized by seven main objectives based on five general themes: mobility, energy, environment, urban regeneration and tourism. Thus, through eight projects, the strategy of the Masterplan establishes new landscape standards for a general improvement of the quality of life, working both on the potentialities of the built environment and on new environmental implementations: from the reactivation of the ecological networks of the coastal landscape to the introduction of new networks of sustainable mobility; from the requalification of the agricultural production chains and of the urban fabric to the use of renewable energy sources in order to make the region self-sufficient.

In particular, the mobility plan foresees the strengthening of the railway line with the construction of a light metro line that locates seven new landings between Salerno and Agropoli, thus including a highly isolated territory from the periurban connections standpoint. In this regard, a cycling-pedestrian mobility network of 300 km, practically nonexistent today, is also implemented, as well as a fast transport line along the coast from Salerno to Paestum. Other interventions concern the road system, with the reorganization and redesign of the two main arteries through specific interventions aimed at diverting traffic through secondary connections, as well as enhancing the coastal territory, with the increase by 50% the permeable areas.

Particular attention is devoted to the energy issue, with a study of existing potential, to be implemented with innovative solutions. Therefore, greenhouses, which have an impact on the landscape and the environment, are redesigned as clean energy hubs: once the plastic coverings are removed and the main structures replaced, the roofs are converted into sliding agrivoltaic systems, in order to allow a partial return to soil permeability. In addition, strategies aimed at large-scale energy self-sufficiency include converting livestock wastes into a resource, turning part of it into biomethane – to be fed into the domestic gas grid – and the other part into soil composting.
Even the sea, an essential element for the whole territory of Campania, plays an important role for the production of clean energy, thanks to the exploitation of wave motion generated by the presence of new breakwater barriers, designed to reduce coastal erosion.

Moreover, along the littoral, the project focuses on the de-artificialization of the coast, through the enhancement of the 270-hectare pine forest, redeveloped with new ecological corridors along the river channels, to improve landscape quality and contain the expansion of urban areas.
In the latter, the regeneration of the urban fabric and abandoned production areas is combined with a study on the recovery of the rural historical heritage, with particular emphasis on the re-functionalization of the structures of old tobacco factories.

Lastly, the regeneration of the historical heritage also includes the areas of Paestum and Pontecagnano, with the goal of reviving the archaeological sites; together with the redesign of the seafront and the creation of attractions linked to the territory (in particular, two hubs are foreseen in Salerno and Agropoli); the aim is to promote and enhance tourism in the area, especially slow tourism, with the recovery of farmhouses and agricultural structures.