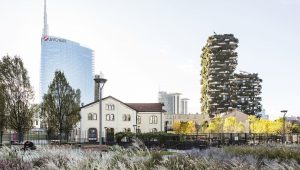 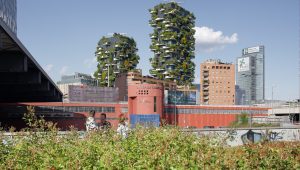 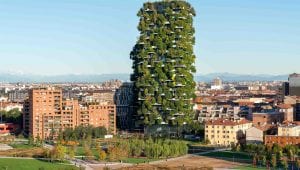 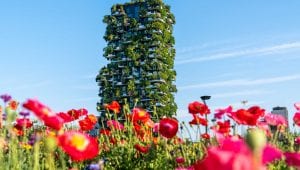 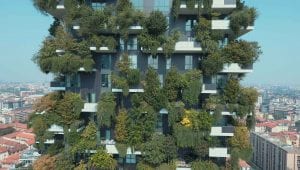 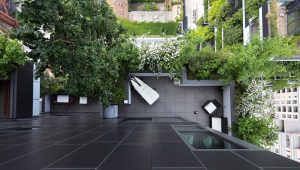 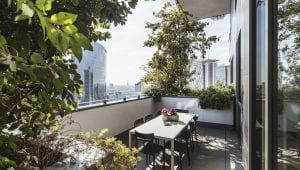 The Vertical Forest is the prototype building for a new format of architectural biodiversity which focuses not only on human beings but also on the relationship between humans and other living species. The first example, built in Milan in the Porta Nuova area, consists of two towers that are respectively 80 and 112 metres high, housing a total of 800 trees (480 first and second stage trees, 300 smaller ones, 15,000 perennials and/or ground covering plants and 5,000 shrubs, providing an amount of vegetation equivalent to 30,000 square metres of woodland and undergrowth, concentrated on 3,000 square metres of urban surface.The project is also a device for limiting the sprawl of cities brought about through a quest for greenery (each tower is equivalent to about 50,000 square metres of single-family houses). Unlike “mineral” facades in glass or stone, the plant-based shield does not reflect or magnify the sun’s rays but filters them thereby creating a welcoming internal microclimate without harmful effects on the environment. At the same time, the green curtain “regulates” humidity, produces oxygen and absorbs CO2and microparticles, a combination of characteristics that have brought the project a number of important awards, including the International Highrise Award from the Deutschen Architekturmuseums in Frankfurt (2014) and the CTBUH Award for the best tall building in the world from the Council for Tall Buildings and Urban Habitat at Chicago’s IIT (2015).

The concept behind the Vertical Forest, that of being a “home for trees that also houses humans and birds”, defines not only the urban and technological characteristics of the project but also the architectural language and its expressive qualities. On a formal level, the towers are mainly characterized by large, staggered and overhanging balconies (each about three metres), designed to accommodate large external tubs for vegetation and to allow the growth of larger trees without hindrance, even over three floors of the building. At the same time, the porcelain stoneware finish of the facades incorporates the typical brown colour of bark, evoking the image of a pair of gigantic trees in which to live and which are rich in literary and symbolic implications. The contrast with a series of elements in white stoneware – the stringcourses of the balconies and some modules on the front of the windowsills – introduces a syncopated rhythm in the composition which breaks up and “dematerializes” the visual compactness of the architectural bodies and amplifies the presence of the plants even more. More than just surfaces, the façades can be viewed as three-dimensional spaces not only because of the denseness and function of the green curtain but also in aesthetic-temporal terms, due to the multi-coloured cyclical and morphological changes in the size of the plants.

The variations in colour and shapes of the plants produce a tremendous iridescent landmark in every season and it is highly recognizable even at a distance. In just a few years this characteristic has resulted in the image of the Vertical Forest becoming a new symbol for Milan. This principle of variation also acts in relation to the different treatments applied on the sides of the towers and the various floors, where the choice and distribution of the plants and trees reflects both aesthetic and functional criteria applied in order to adapt to the direction and heights of the facades. The development of the botanical component, the result of three years of studies conducted together with a group of botanists and ethologists, preceded the lifecycle of the building complex since it started in summer 2010 when the plants destined to be installed in the towers were in fact cultivated in a special botanical “nursery” set up at the Peverelli nursery and garden centre near Como in order to get them used to living in conditions similar to those found in their eventual homes.

Rather than just a simple architectural object therefore, the presence of the plant component means that the Vertical Forest is more akin to a set of processes – partly natural, partly man-managed – that accompany the life and growth of the inhabited organism over time. Perhaps the most unique component of this highly developed system, now widespread in urban imagery, is that of the “Flying Gardeners”, a specialized team of arborists-climbers who, using mountaineering techniques, descend from the roof of the buildings once a year to carry out pruning while checking the state of the plants in addition to their eventual removal or substitution. All the maintenance and greening operations are in fact managed at the condominium level in order to maintain control of the anthropic-vegetal balance. Irrigation is also centralized: the needs of the plants are monitored by a digitally and remotely controlled installation while the necessary water is largely drawn from filtered effluent from the towers. All these solutions overcome the still essentially anthropocentric and technical concept of “sustainability” while moving in the direction of a new biological diversity. A few years after its construction, the Vertical Forest has given birth to a habitat colonized by numerous animal species (including about 1,600 specimens of birds and butterflies), establishing an outpost of spontaneous flora and fauna recolonization in the city. 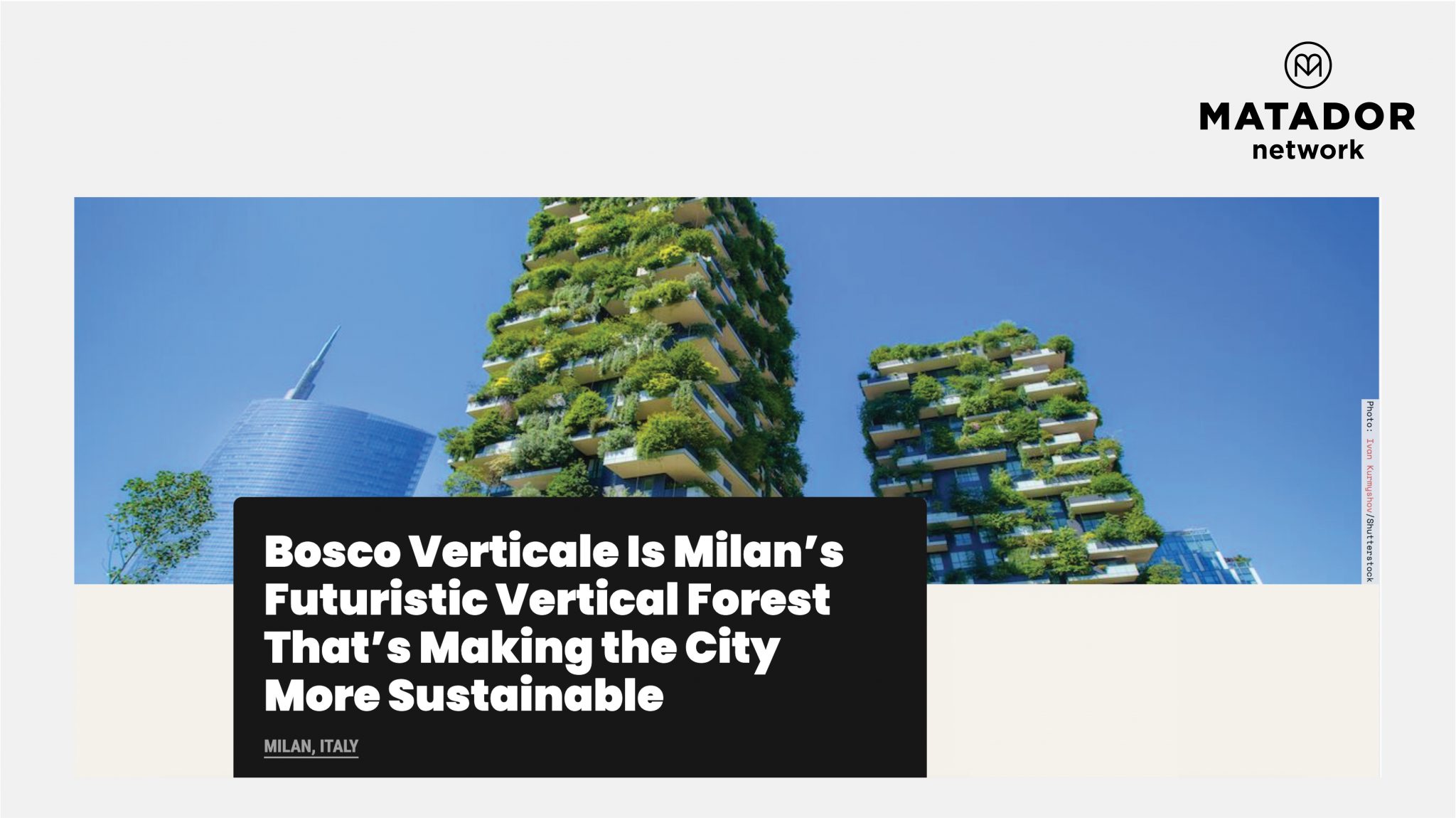 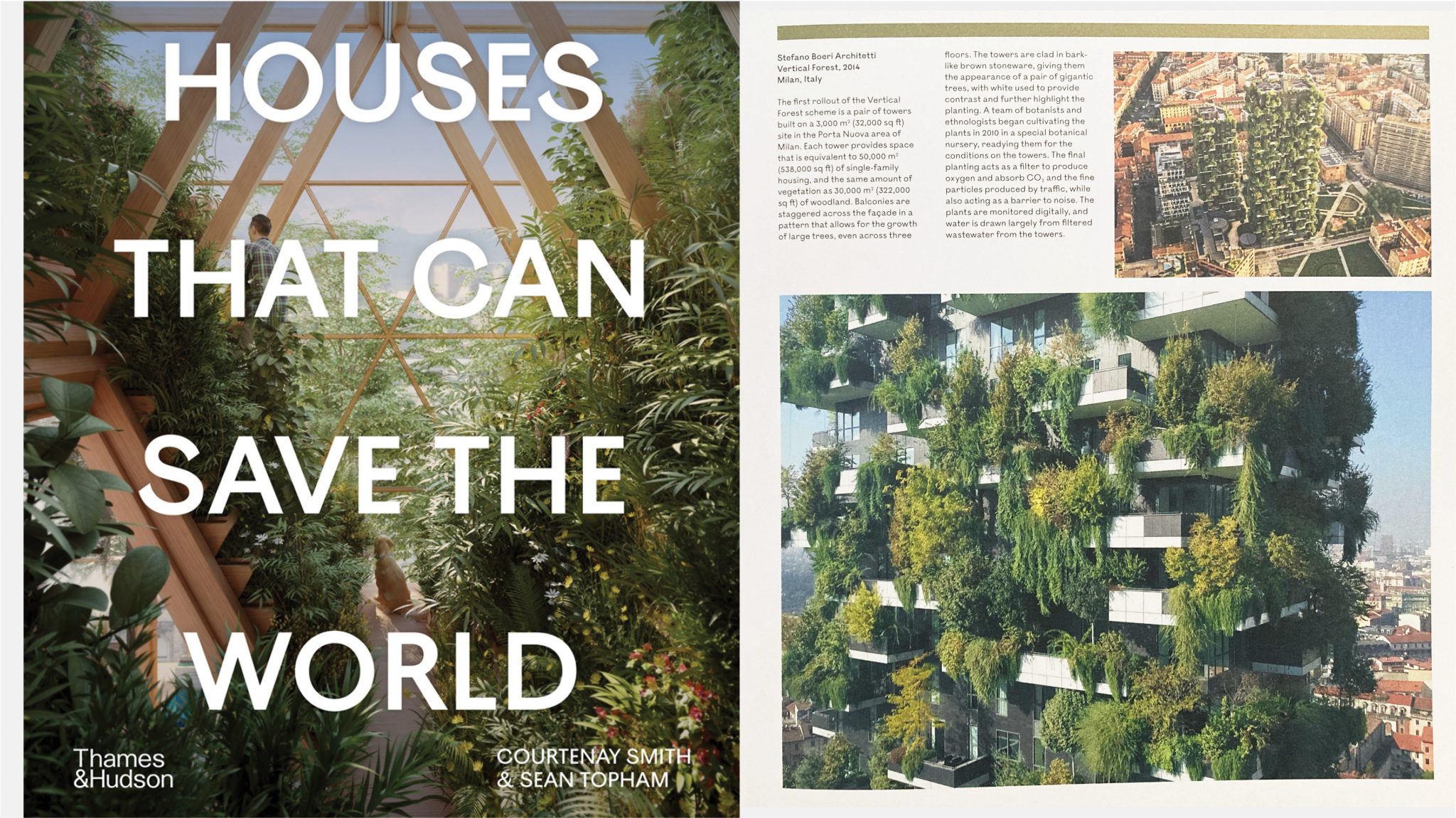 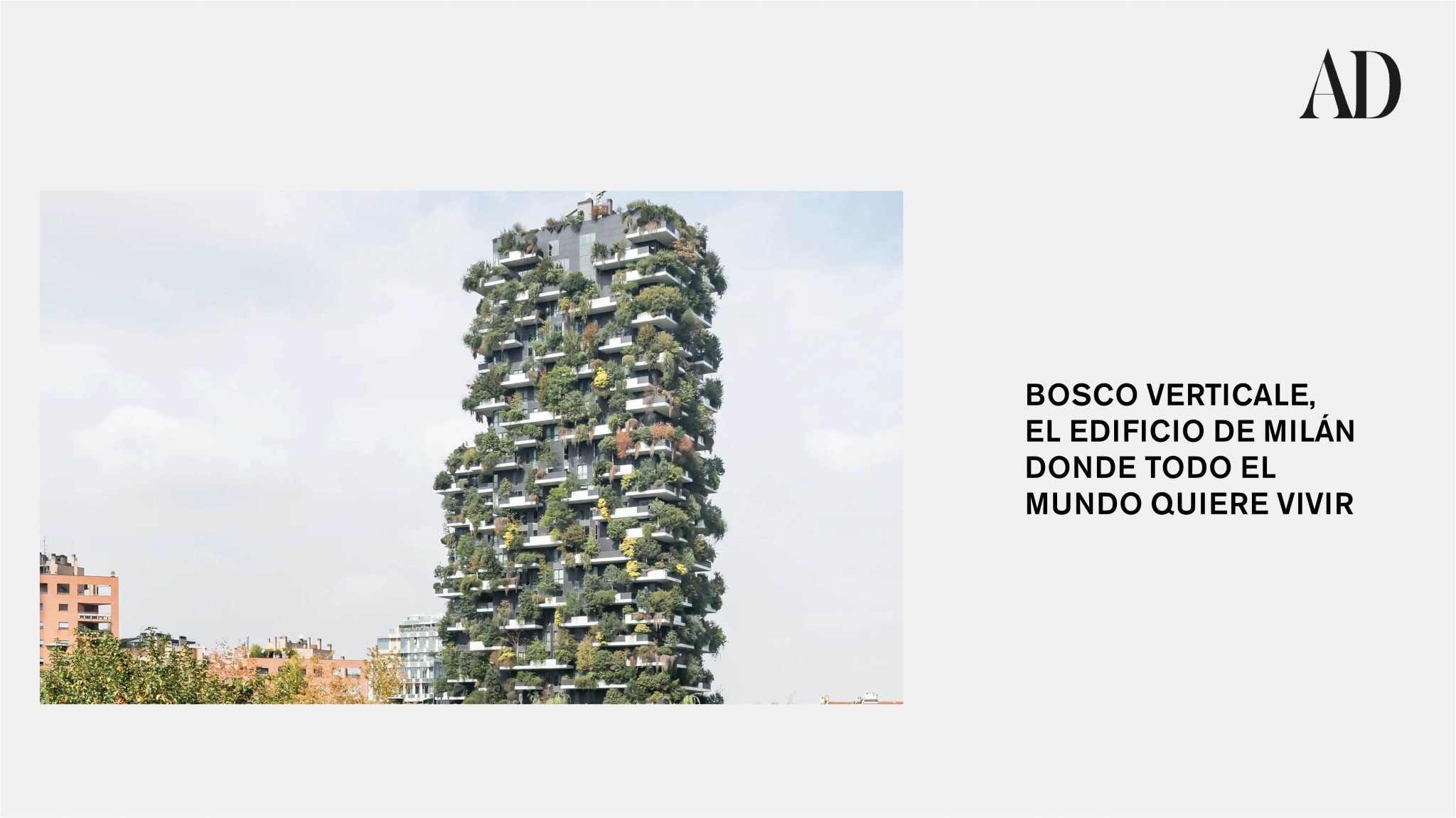 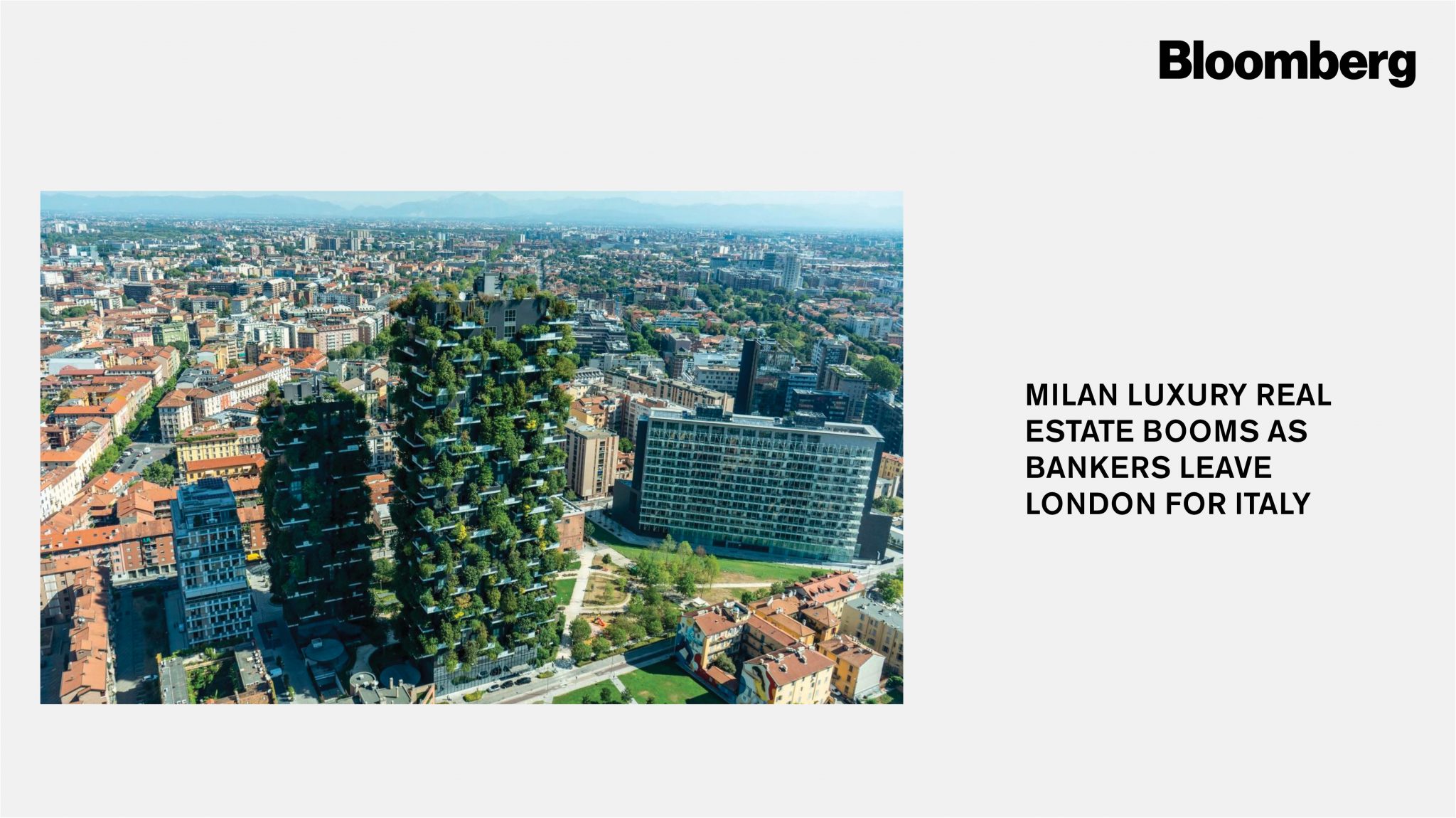 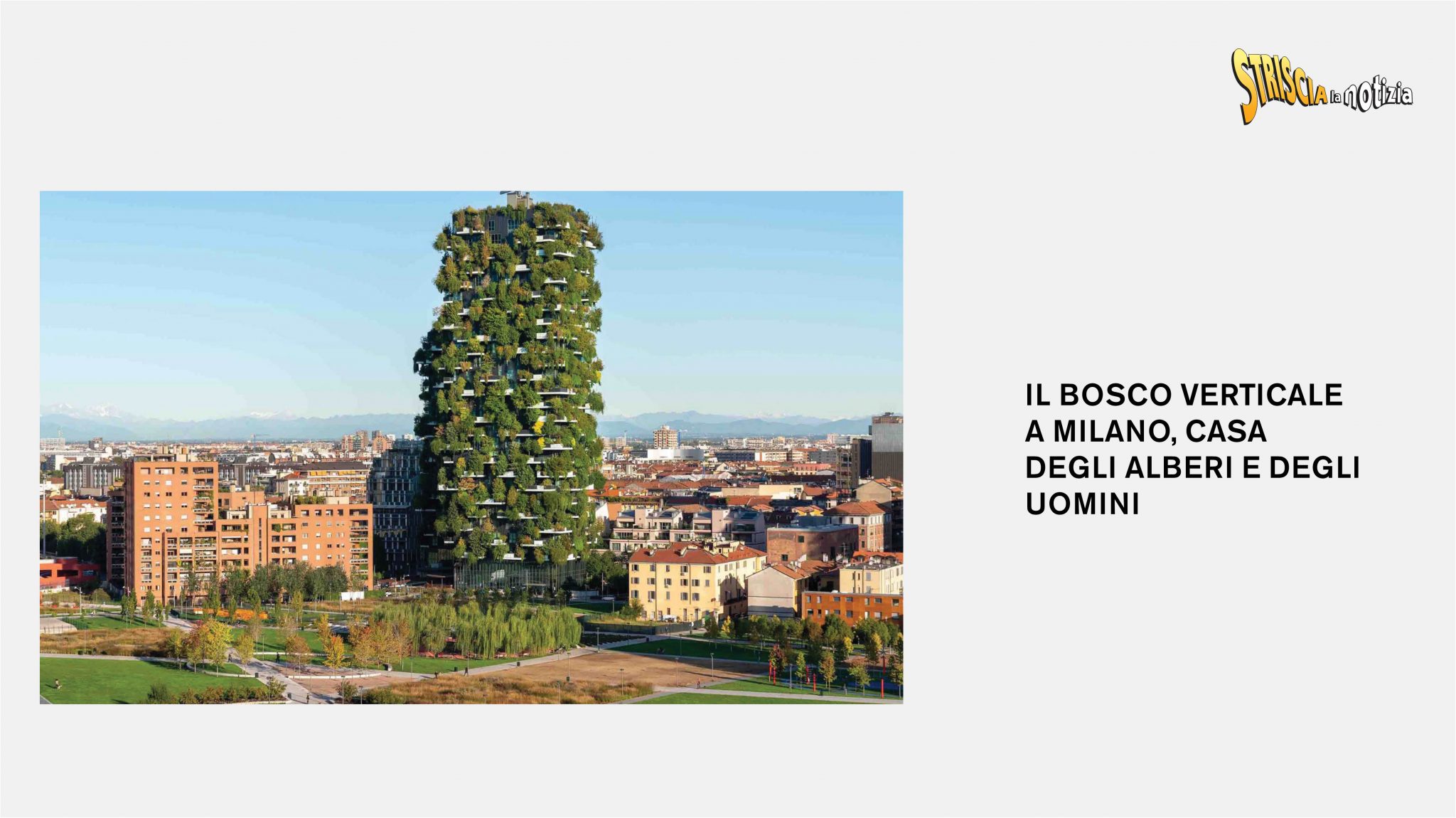 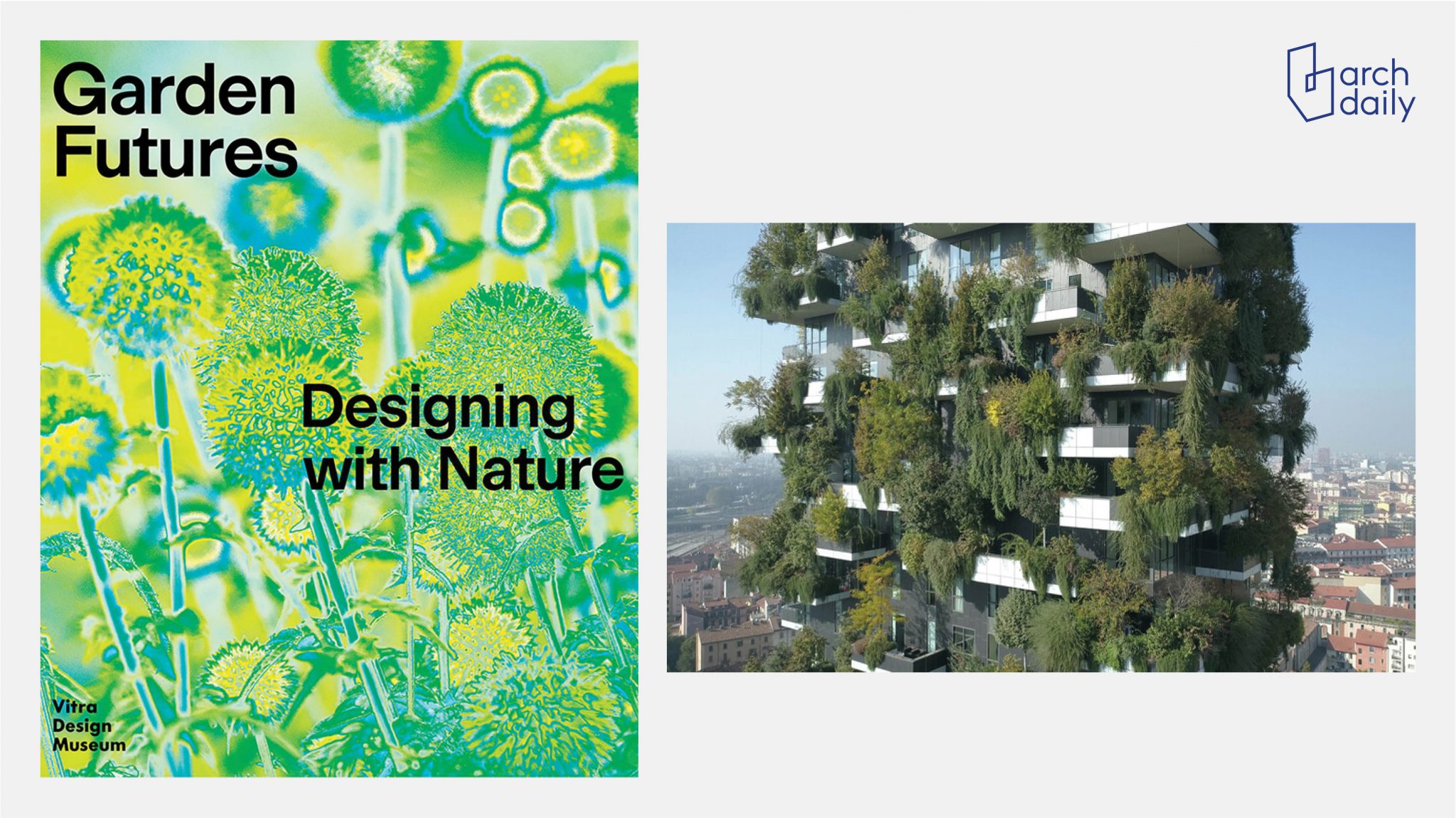 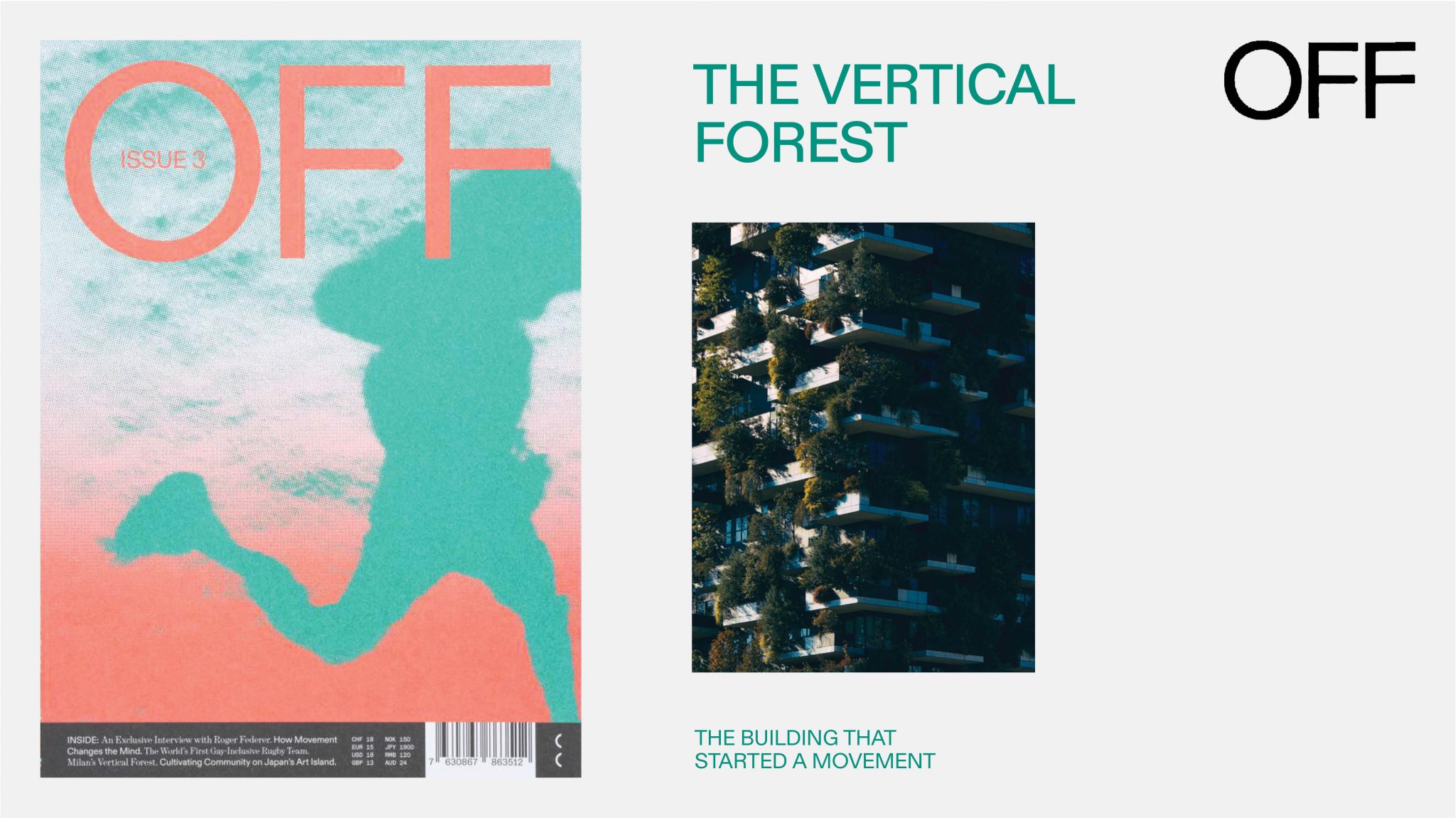 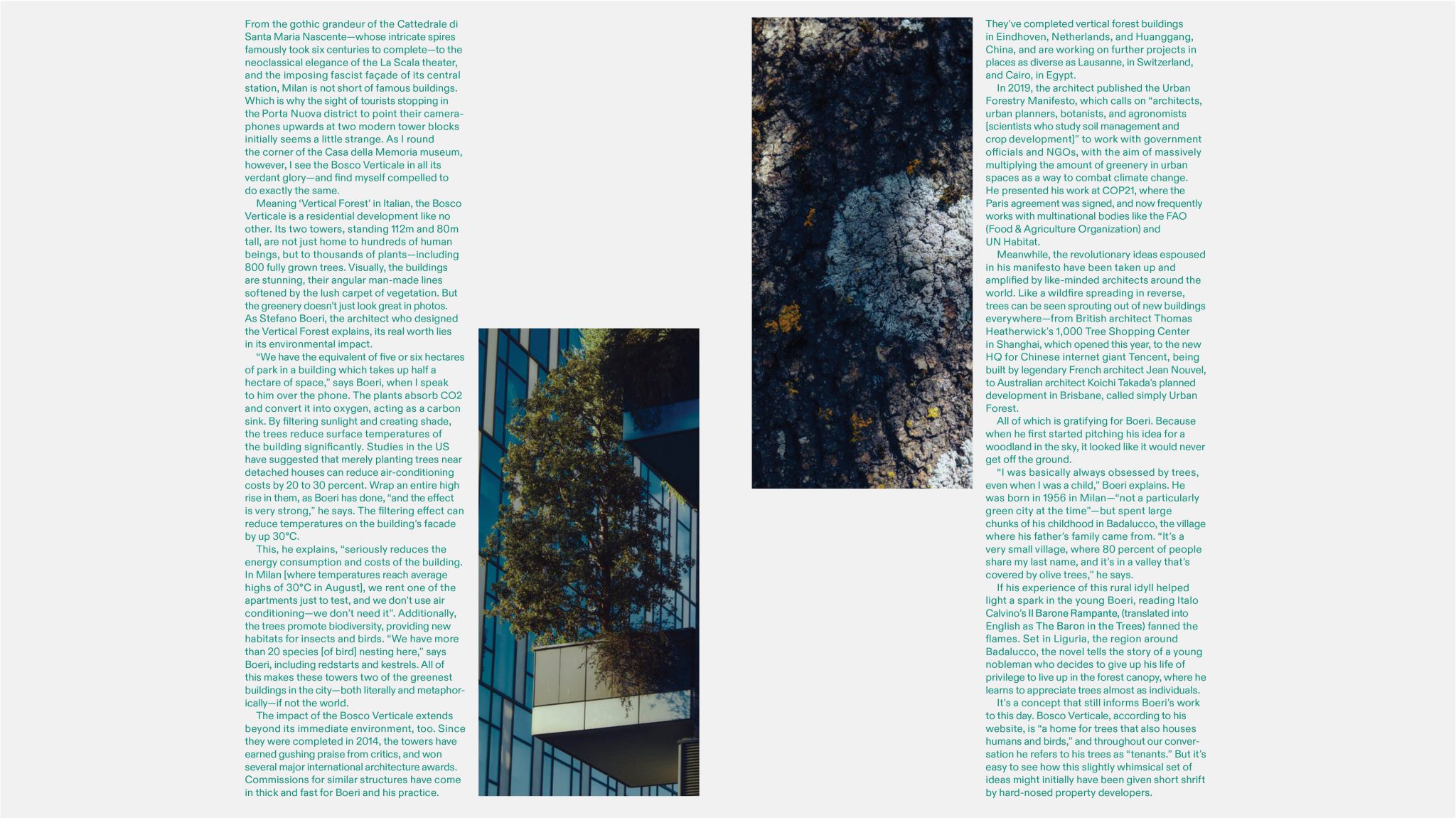 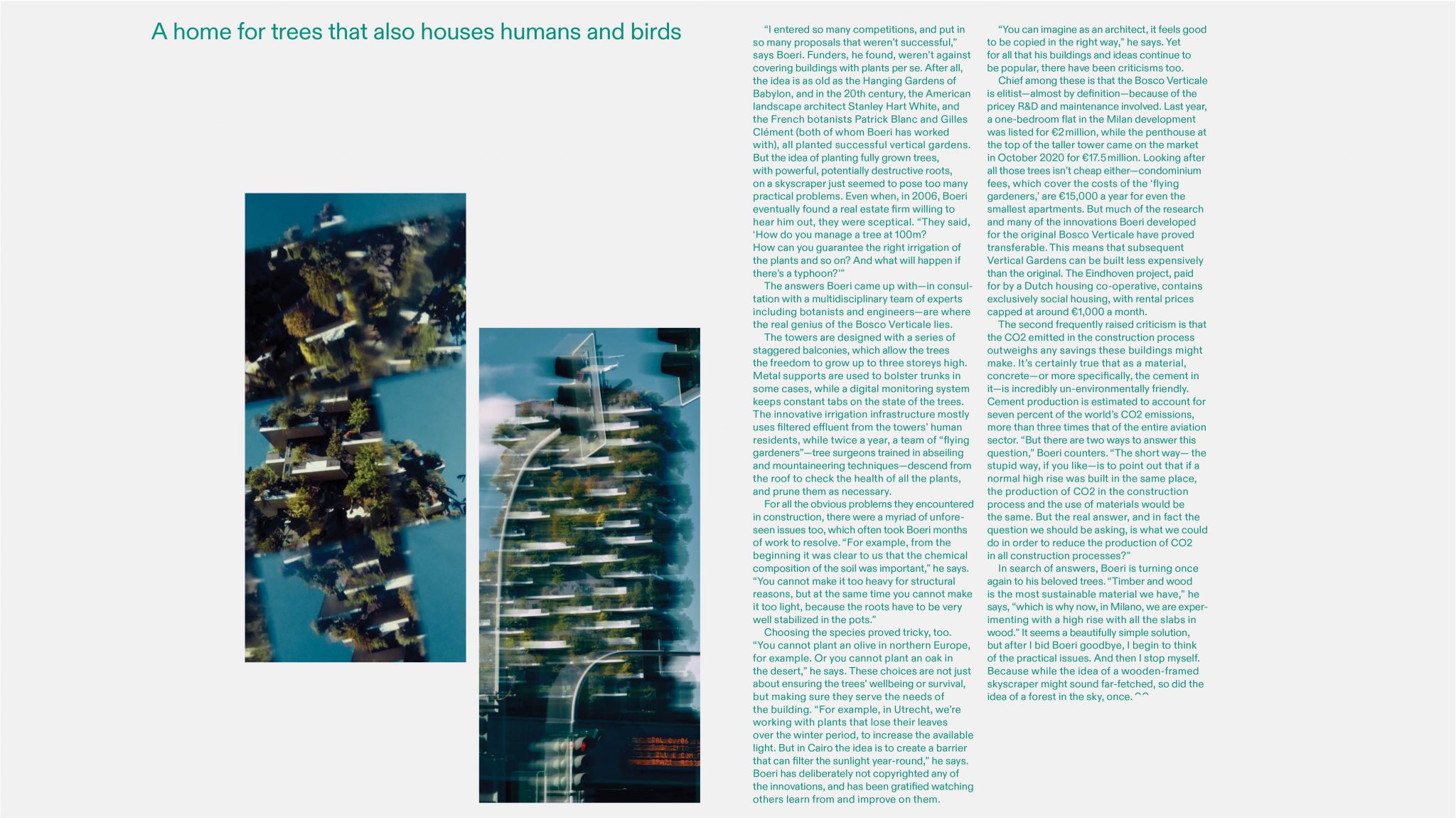 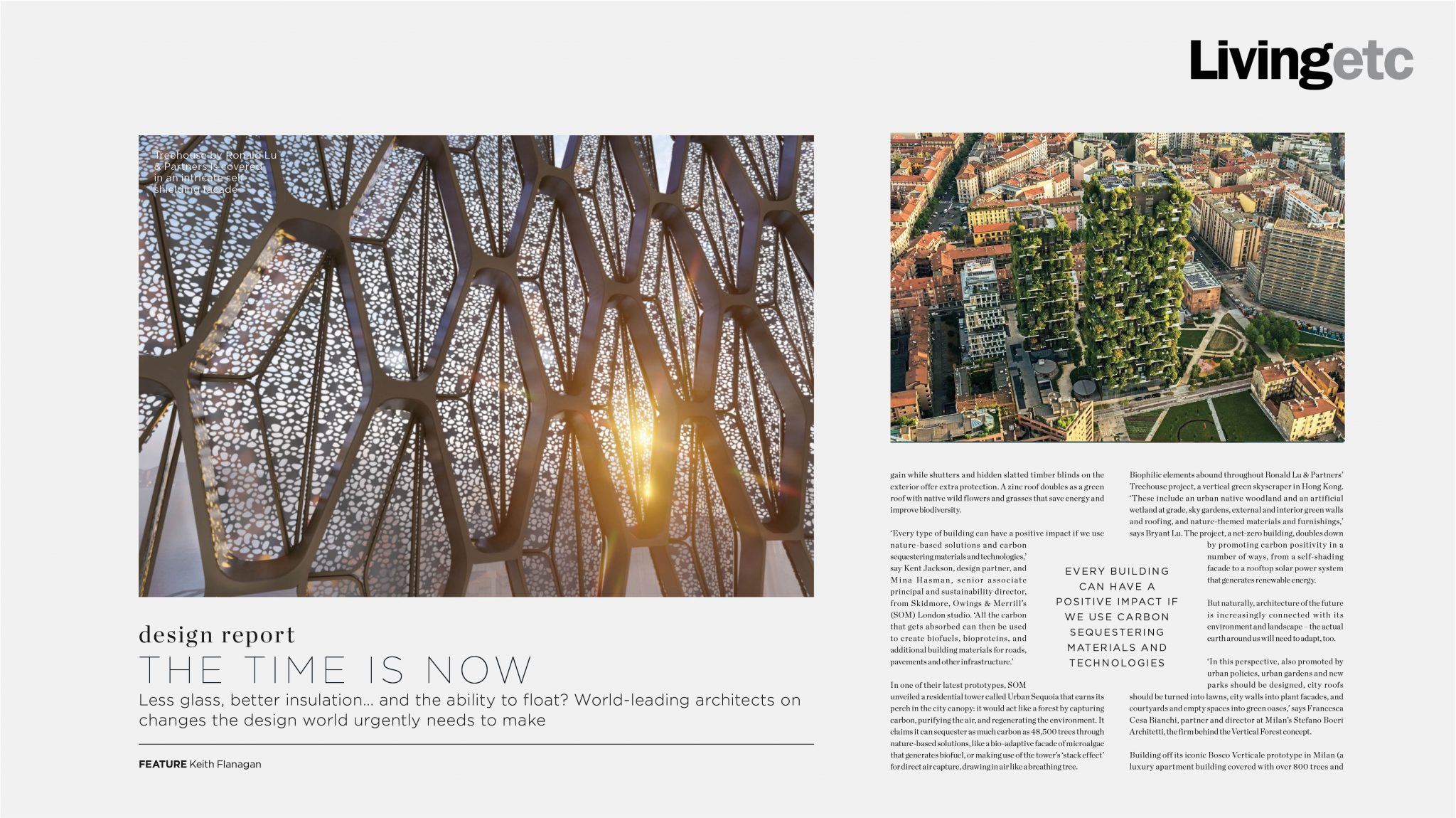 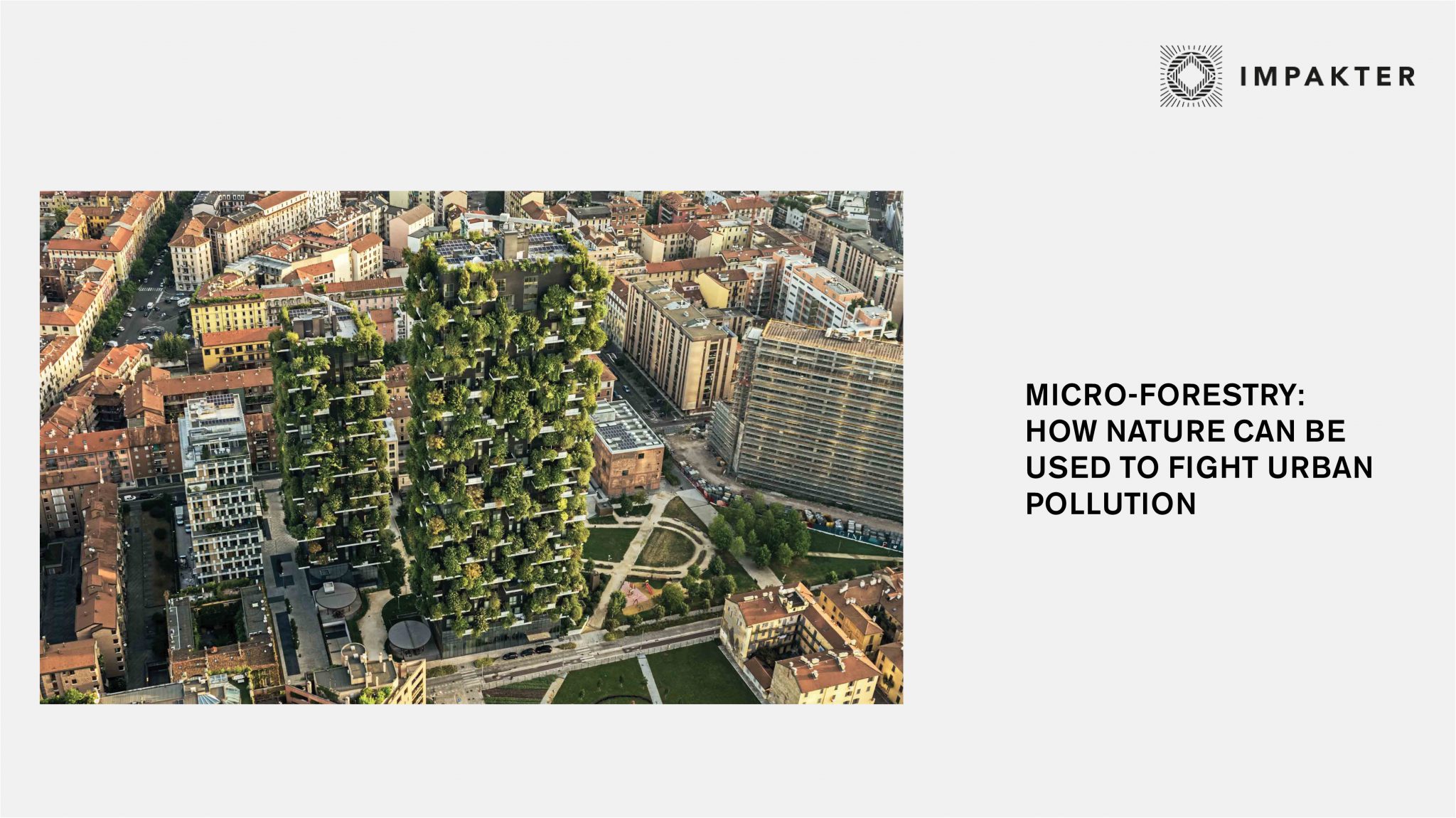