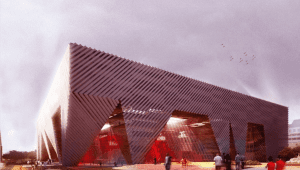 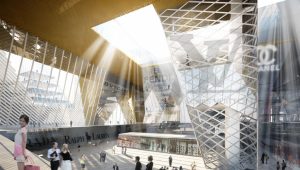 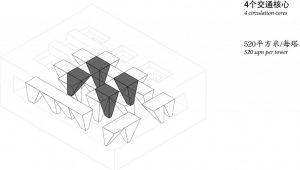 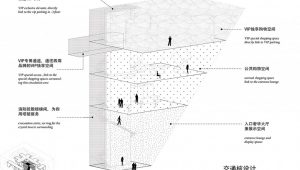 The Wangfujing site is located eight hundred meters away from the Forbidden City, on one of the historical commercial arteries of the city and one of the few central urban voids left in Beijing. The project is proposed with two main objectives in mind: to invent a new form of urban commercial space distancing itself from the logic of the mall and creating a symbol of commerce and cultural dialogue between China and Italy. Complex in its typological innovation and mix of functions, the 18,000 square meter building is intended to operate as a towline for the modernization, renewal and repositioning of the Wang Fu Jing artery as one of the main nodes for high end commerce of Asia.
An initial source of inspiration and matter for reinterpretation was Galleria Vittorio Emanuele in Milan and, in general, the 18th and 19th century archades in Europe. Although often questioned at the time of their construction, they have been introjected into the public consciousness and transformed into privileged places where city fluxes, brief encounters, shopwindow displays, highstreet commerce, performances and events coexist. Therefore, the project for Wangfujing is a reflection on the qualities of these spaces, a reinterpretation adapted both to today’s functions and to the cornerstones of the Chinese traditional construction, especially with regards to the notion of meaning in its relation to the place.