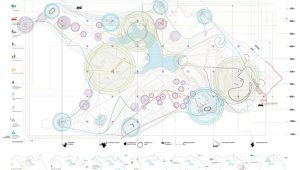 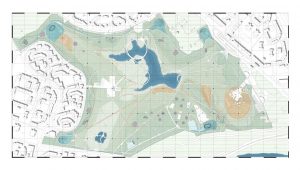 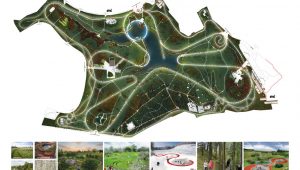 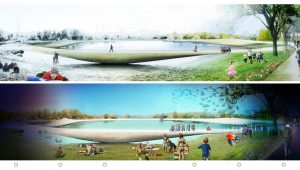 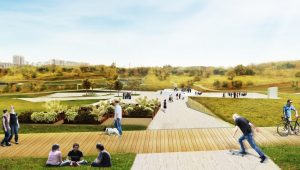 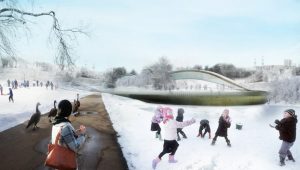 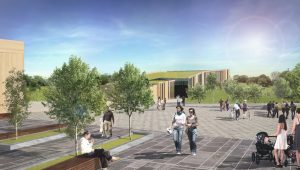 The Time Park project is located in Moscow’s Mitino district and covers an area of ​​126 hectares with the Riga railway line on one side and includes unique archaeological monuments, a 6 hectare basin and a high voltage power line. The park’s slogan is “Take your time” and the space has been conceived as a green oasis immersed in the urban setting. The idea is that of slowing down the rhythm of the city as one moves from the outer limits to the centre, which translates into a design of concentric devices which in the external environments contain spaces for energetic activities (sports or dynamic urban functions) while at the centre they host places for relaxation and meditation. The boundary of the park also acts as a green belt that protects and separates the interior from the urban context. Based on both conceptual and morphological choices – the altitude difference in some points reaches 30 metres – five main areas are identified and then connected to each other via a path in a radial pattern from which each branch leads the visitor from a particular centre of attraction to the heart of the park, following the natural curves of the landscape.

A small portion of the archaeological museum, which contains ancient Slavic graves, is located near the Metro station and is mainly dedicated for use by citizens from other parts of Moscow. The museum building itself is part of the natural panorama: its roof is a landscape amphitheatre and the vertical elements which create the façades adapt organically to the surrounding natural environment. Following the same concept, the recreational area behind it is provided with seats while the shape of the overall area repeats the contours of the historic mounds and fits in with the surrounding natural situation.

There is a certain hierarchy between the various design centres of gravity, including the star-shaped square in the western part of the park and that of the city dedicated to residential districts, on which the raised circle catches the eye. This is located in the Northern part of the small Penyaginsky lake, and is used as a pedestrian and hiking path inside which a pop-up area allows people to enjoy the water (or ice) depending on the season.

At three points of the circle the route itself is divided into six paths with different scaled slopes, so that users can choose the route best suited to their preferences, speed and physical abilities. The entrance to the park, in the direction of the main star-shaped square, is notable for a structure conceived as a large ramp along with several terraces designed to house gardens featuring numerous varieties of plants that can be replaced periodically according to the season or event and thereby changing the appearance of the entrance from time to time. The natural slope of the relief of this part of the park is used, next to the entrance structure, for the construction of a small stage and a modest amphitheatre, remaining in direct contact with the square which maintains its recognisability and allowing it to function actively at any time of the year.

On the Northern branch of the same square there is a recreational area with benches shaded by trees and a water park consisting of a platform bordered by a modestly-sized water-filled space, used in summer to escape from the local heat and attractive as a winter skating rink. The North-East facing section serves as a venue for both local markets and exhibitions: during harvest time this area will be used for events in which visitors can enjoy the products grown locally by schoolchildren in the nearby Mitya gardens in the North-Western part of the park; during high days and holidays it can be used for art or flea markets or a large food market. The structure ends with a large interactive portal that frames the view of the pond and park. The area called Vostochny Ray is a multidisciplinary sports field, the Yuzhny hosts the main stage featuring a screen while the central amphitheatre, whose upper platform is home to one of the navigation points, is designed for users to observe events taking place in different parts of the square.

In the central part of the square there are benches and flower beds in a linear format underlining the direction of movement towards the centre of the park. The square on one side is framed by a complex of pavilions containing a small cafe and the museum shop while the other is home to the administrative building containing services for visitors to the various surrounding facilities.

Thirty 3×3 metre objects are located at a distance of 200 metres from each other and positioned as the nodes of the rectangular grid that outlines the project. Strictly in line with the four cardinal points, these objects are used as signs, information panels and Internet access points, benches, sun loungers, slides, swings, awnings and places for picnics and meetings. Some include drinking fountains or small rooms for the technical needs of park workers. The solar panels installed on the roofs provide them with energy for lighting: each one, in the shape of a cross contains information on the cardinal points and on the elevation of the location with regard to the Penyaginsky lake.

This device appears in every area of the park: in woods, meadows, waterfront areas, crossroads between paths, in the square and inside the archaeological museum, combining the characteristics of the entire area and highlighting the best qualities. The volume, recognizable as a cross, varies in terms of space occupied according to the needs and characteristics of each location while retaining the same format.

Particular attention was paid to the old water tower, a picturesque example of Soviet architectural heritage dating back to 1957, whose original structure is surrounded by two new self-supporting spiral staircases These are connected at the top via a platform, leaving the existing architectural monument unaltered and making it one of the park’s attractions. The possibility of climbing to a height of 15 metres increases the value of the building, allowing it to be viewed from all angles and providing new panoramic views for visitors.