The Tower of Cedars 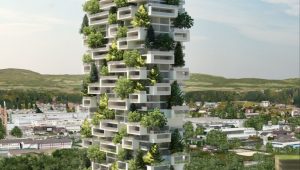 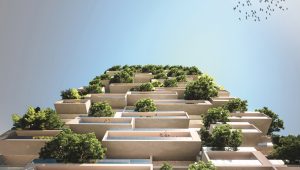 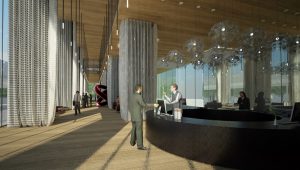 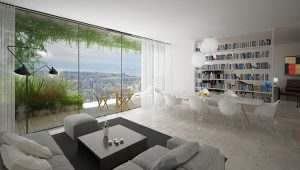 In 2015, Stefano Boeri Architetti won an important international architectural competition for a tower mainly for residential use to be built in the town of Chavannes-Près-Renens near Lausanne (Switzerland) beating the proposals of the Mario Botta, Richter Dahl Rocha & Architetti Associati and Goettsch Partners studios in the process. This is how La Torre dei Cedri or the Tower of Cedars came to be but it is more than just a simple tower or a “house” extended vertically. The project, which is currently under development, is rather a genuine prototype of a new model of housing, capable of providing a harmonious coexistence between a high level of comfort within the apartments and a direct and privileged relationship between the inhabitants themselves and the natural and vegetal world that houses them. In particular, the principal character residing in this space (as much as if not more so than humans) is the cedar tree. Characterized by an iconic shape and a high resistance to climatic variations, it is found here in a number of different varieties which establish and continue a dialogue and a continuity of habitat with those already populating the surrounding area.

These primary factors give a powerful definition to the project and are combined with a unique condition of exchange and empathy with the typical local lakeside landscape through giving an open view from the tower over Lake Leman. In the same way, but from a different observation point, the vertical and unmistakable presence of the building stands out as a new, strong territorial landmark: an urban point of reference visible from all over the north of Lausanne. This presence confirms and reinforces the extraordinary balance between nature and the city, Lake Leman, the forest and the fields – all those basic elements that make up the rich DNA of the “Chavannois” landscape. In this way La Torre dei Cedri should be considered not only as a particular example of decisive design innovation but also as an important element on a broader scale and on a conceptual, cultural and symbolic level. In these terms, the project can be interpreted as a “living symbol” of a new relationship between the urban and the natural sphere and an essential example of biodiversity architecture following the initial and well known pilot case of the Vertical Forest in Milan.

From a typological and construction point of view, the Lausanne tower is a 117-metre-high rectangular-shaped building with a floor plan of 52 x 15.5 meters and laid out along a north-south axis. In addition to the 195 apartments of different sizes and types, the 36 floors of La Torre dei Cedri offer a large number of spaces for office use and communal services including a gym and a restaurant. Most of all however, the structure houses more than 80 large trees taken from three different types of cedars in addition to shrubs and other plants of various size and species to give a total planted area of ​​about 3,000 square metres.
In order to create a sense of harmony with the floral organisms, the overall volume of the tower is characterized by the presence of a series of protruding elements including loggias of variable length in a staggered arrangement that, in addition to housing the trees as if they were in gigantic “pots”, enlivens the facades and breaks up the rigid vertical succession of floors. With overhangs of over 3 metres, the projecting elements are mainly arranged on the south façade and, to a lesser extent, on the east and west facades. Observed from inside, the loggias extend the space of the apartments outwards, allowing the inhabitants to “project” themselves into the surrounding landscape: an immersive sensation amplified exponentially by the presence of the natural green interface.

In addition to the residential tower, the project developed by Stefano Boeri Architetti includes a commercial centre of 5,000 square metres serving the new complex, and the design of various public connecting spaces. In terms of distribution and architecture, a definite separation between the various functional areas is envisaged. This clear distinction between primary uses thus generates the design of three buildings, set in close relationship with one another and connected by an open public space. The relationship between the principal built volumes establishes a dialogue between full and empty and at the same time reconciles the coexistence of the architecture and the open-air surfaces, a little like the equilibrium that is generated inside a wood between the bushes and the open clearings. These interposed places can thus be experienced as environments rich in activity, exchange and sharing. The decision to separate the residential development of the tower from its base, designed to host public functions, is to be considered in the same context; a distributional layout that is intended to further promote the growth of vital urban and energetic relationships between all the elements that make up the new district.