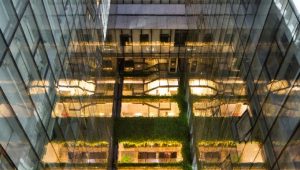 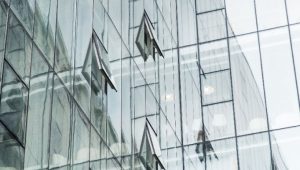 Designed by Lu Qianshou and inaugurated in 1934, the historic headquarters of the Shanghai Stock Exchange is located in a very lively area of the city, not far from the Bund and the People’s Square near Nanjing Road and Jiujiang road and teeming with commercial activity. Although it has not been used as a stock exchange for several years, the building is still in good condition and has been re-designed for different uses, once more becoming a point of reference for the city.
The project conceived for this structure moves through the typical Italian design culture ideas of restoration and reuse which are destined to make great changes in the dynamics of future Chinese development.

The most notable element at a design level is the transformation of the great hall of the stock exchange into a passage that connects two important streets in the area. This open-air passage contains a sort of “green box”, a room covered with multi-pocketed pieces of fabric filled with earth in which to grow plants and thus give life to entire plant walls as “a sort of decompression chamber compared to the density of traffic”.

The external staircase, which allows direct access from the road to the roof terrace, is of a considerable size and also has plant elements throughout its vertical development. Small tables and benches, trees and dining areas have been placed on the terrace and these become elements that turn it into a real square, a new example of a place for meeting and where one can relax and get away from the urban chaos while in the evening the space can be used as a theatre or open-air cinema. In this way a building that is still in excellent condition has been reassessed and reused instead of being abandoned: the memory of what was has not been erased – on the contrary it has been enriched.

Inside, the structure houses exhibition halls, galleries, start-ups and offices belonging to companies looking to invest in China. Thanks to these elements there is a union of public and private, giving rise to new and interesting types of relationships. Even between the inside and the outside there is no longer a clear distinction, as with the redesigned structures and the pre-existing historical parts.
The design offers elements recalling two different stylistic models, one being the Vertical Forest by  Boeri Studio with its dense vegetation capable of giving oxygen back to the city, the other being the Casa Malaparte by Adalberto Libera on account of the particular staircase that rises to the level of the roof and offers a suggestive view of the city skyline.