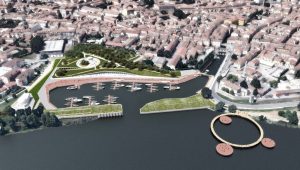 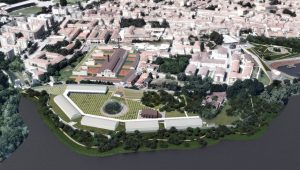 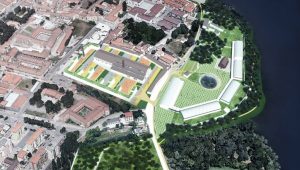 “Regenerating” does not mean simply reclaiming or protecting, but also rediscovering and renovating buildings, landscapes, parts of cities and economic and cultural functions. Starting from this conceptual basis, in 2016 Stefano Boeri Architetti began a reflection on the nature of the relationship between the city and the water, investigating the stratified interrelation between Mantua and the Lago Inferiore or Lower Lake. By redeveloping a system of under-utilized, abandoned and deteriorating spaces, the project identifies a new “Territorio di Mezzo” or “Middle Territory” set between these two large territorial areas: an area consisting of a sequence of collective spaces, each characterized by a precise urban and public function. To encourage coexistence between an active and working marina and the city as it is, the intervention programme defines the presence of a new intermediate space, able to preserve the distinct nature of the two worlds on either sides and to absorb resources and energies from both at the same time. The new Territorio di Mezzo interacts on a considerable scale with both the city and the water: with the flow of tourist boats, the daily life of Mantua and its cultural and productive elements.

To best deal with such a wide programme, the project is divided into four squares, each with its own strong character. These are Piazza dell’Acqua, Piazza della Terra, Piazza del Pensiero and Piazza del Paesaggio. These environments are not only designed as a new system of collective places for the city, but also summarize some of the main characteristics of the territory of Mantua, its relationship with water, with land and food and the presence of nature and culture. The Piazza del Paesaggio is planned as the first area of interention to be completed. This is an environment consisting of two distinct urban areas: the Valletta Valsecchi district and the football fields area. The first, located south of the San Nicolò area, currently has an almost total lack of services and businesses as well as a large number of social or council houses. The first need that emerges from this analysis is therefore the taking advantage of the high environmental potential of the context, currently underutilized or not fully exploited and an operation to be developed using the connection with the port and the ​​S. Nicolò area. In parallel with this, the redevelopment of the area now used for football fields will allow the construction of a new urban green space, crossed by a series of cycle paths within a clearing and connected to the existing cycle and pedestrian network and the city centre.

The second stage sees the development of the Piazza del Pensiero on the western side of the San Nicolò area: an abandoned industrial site of almost 20,000 square metres typified by a high level of decay, insecurity and urban deterioration. Here the project involves the renovation of the historic central building to be allocated for the construction of a technical school for 1,000 students in direct contact with the most innovative local production companies. The open connecting spaces between the buildings will have a community role to play, linked to the promotion of cultural events and activities. This solution is intended to increase the appeal of the area and the effectiveness of the transformation process. In addition to the rennovation of historic buildings, it will be possible to create residential private buildings on the edges of the area.

The Piazza della Terra is planned for a former military zone of about 50,000 square metres with great historical and cultural value. Within the zone there are five vaulted sheds and a powder magazine, now abandoned and in a state of decay. In this case, the redevelopment focuses primarily on the reclamation of existing green systems and the enhancement of ecosystems: a process that can be implemented through an incisive re-greening intervention, particularly along the western shore of the Lago Inferiore. The project also includes a new cycle path on the two edges of the area, taking advantage of the Vicolo Maestro site that connects Valletta Valsecchi with the Eurovelo 7 through a cycle-pedestrian bridge over the port. In addition to the conservation and reclamation of the historical buildings, the construction of a new bioclimatic greenhouse on a raised platform is planned, designed to increase the area’s attractiveness and its potential for instructional/free-time activities.

The last of the four environments of the Territorio di Mezzo, the Piazza dell’Acqua, is planned for the Porto Catena area and aims to re-establish the historic relationship between the city and the lake. The redevelopment of the port is based primarily on the definition of a new layout for the moorings, increasing them in number and thereby giving life to a  fully equipped tourist infrastructure able to fit into the system of inter-regional pleasure boating. By improving and making the connections with the city’s pedestrian walkways more functional, the project will be able to revitalize the entire area, transforming it into a public promenade on two levels: one at the current height of the service road to the shore, and one at water level. The re-established relationship between the city and the water is also expressed through the placing of a roof on the current Anconetta parking facility: the masterplan includes the redefinition of the layout of the entire parking area and the creation of a green roof that can be used to link the public spaces within the port with those of the city. The creation of the Piazza dell’Acqua also includes the redevelopment of the port’s ramparts, the redeveloping of local mobility through the partial closure of via Argine, the positioning of a new planetarium in the area south of the port and the transfer of port services to the underground section of the car park, in line with the natural progression of the land towards the lake.

The project has been selected and funding granted for the first phase of the 2016 Piano Periferie, or Plan for the Suburbs, aimed at the urban redevelopment and security of the suburbs of metropolitan  and provincial capital cities, as promoted by the Renzi government.