The Polcevera Park and the Red Circle 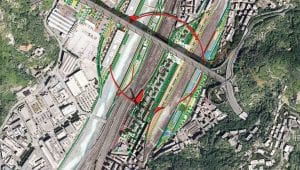 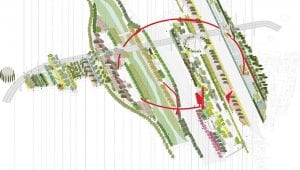 A steel, red circle. A ring that embraces, passing under the new bridge designed by Renzo Piano, a territory of iron, water, cement and asphalt. The Polcevera Park and the Red Circle is conceived by Stefano Boeri Architetti, in collaboration with Metrogramma, Inside Outside and Studio Laura Gatti, as a system of parks with different ecologies and infrastructures for sustainable mobility, with the aim of overturning the current image of the valley through a symbolic and manifest element of an urban reconnection between the two sides of the valley.

The intervention as a whole aims at the reconstruction, both architecturally and urban, but above all socially, of an extremely diverse area: a rebirth of quality in terms of appearance and services, designed above all for the people who live and work there. In fact, the aim is to rebuild a cohesive, socially active urban system, innovative enough to revitalise not only the quadrant itself but to become an attraction for the surrounding areas. A new regenerated and redesigned site that becomes first and foremost a device for relations and distribution of renewable energy, with the objective of returning a sustainable district to the city: a cycle-pedestrian system 1570 metres long, 6 metres wide and 250 metres in diameter opens up to the district at the new Station; a 120-metre high Wind Tower is designed as the conclusion and completion of the Red Circle, and accommodates 144 wind turbines, promoting the production of clean and renewable energy; in addition, the architectural and landscape elements as a whole prove capable of collecting and distributing the energy produced by the solar collectors – thermal and photovoltaic – on the roofs of the buildings, by the piezometric paving – which symbolically contribute to the energy balance – and by the Wind Tower itself.

The landscape project presents a structure of parallel strips that order the entire site, giving shape to a 23-hectare botanical park composed of 2.895 trees of 43 different species, where each strip, varying in width from 7 to 20 metres, is emphasised and flanked by a pathway representing a different type of garden, capable of increasing the biodiversity of the entire area.

The experiences hypothesised for citizens are varied and manifold, as are the actions permitted by the equipment present: within the project it is possible to do sports, play, walk in nature, enjoy areas dedicated both to animals and to recreational, educational and socialisation aspects. A further zig-zag path runs perpendicular to the linear gardens and becomes the only possible connection between the East and West ends, until it reaches the Red Circle, a relational device that intersects all the strips and creates connections that were previously impossible, allowing cyclists and pedestrians to move everywhere with ease.

All the green areas and squares are built in such a way as to absorb rainwater and runoff; any surplus water will be stored and put to other uses – such as irrigation – both for a practical and sustainable purpose, and for a symbolic value linked to a new landscape, as an image of the resilience of an entire city.

The architectural proposal consists of the design of Edifici Mondo (World Buildings), namely large clusters with a diversified functional mix and an essential but recognisable architectural language, a complex of new buildings dedicated to residence, commerce, culture and sport. Inspired by industrial architecture and the blue colour of the Mediterranean, the new buildings are clad in sustainable materials with large roofs offering surfaces for the production of renewable energy. The architecture, between regeneration and new construction, is conceived as a permeable system, in which all layers of the city find space and interact: the buildings dialogue with the landscape, opening up to nature through their shells, to restore a shared semantics by hosting public space.

The Red Circle becomes part of a network of sustainable mobility linking the buildings, in which pedestrian-cycle paths, smart mobility lanes, shared surfaces and intelligent parking areas intersect, each time changing nature according to the morphology of the place, from walkway to elevated square, from access ramp to corridor between the buildings or underground path, as the manifesto of a strategy that feeds on the close relationship with the territory on which it stands.

The whole of the Polcevera Park and the Red Circle – together with the Wind Tower and the Edifici Mondo – are thus affirmed as a new centre around which a district is reborn as a community of life, relations and exchanges, becoming Genoa’s tangible greeting to the future passers-by. 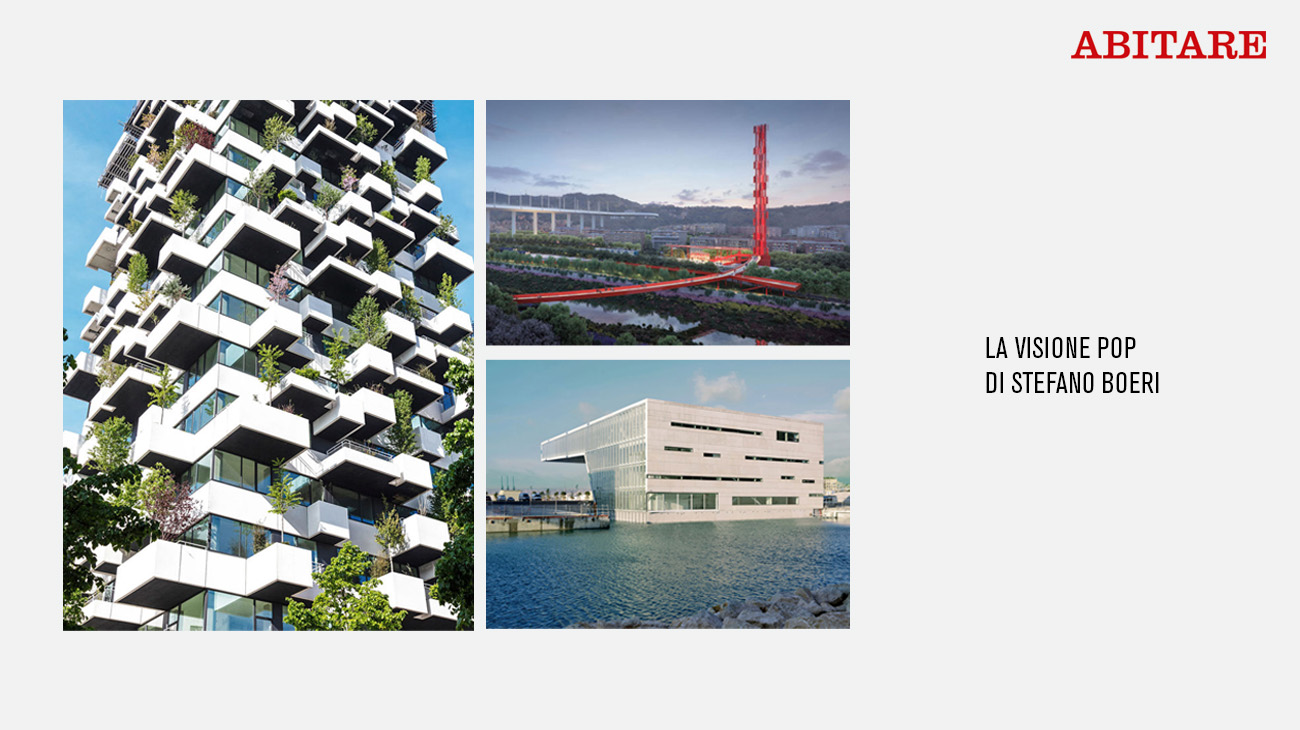 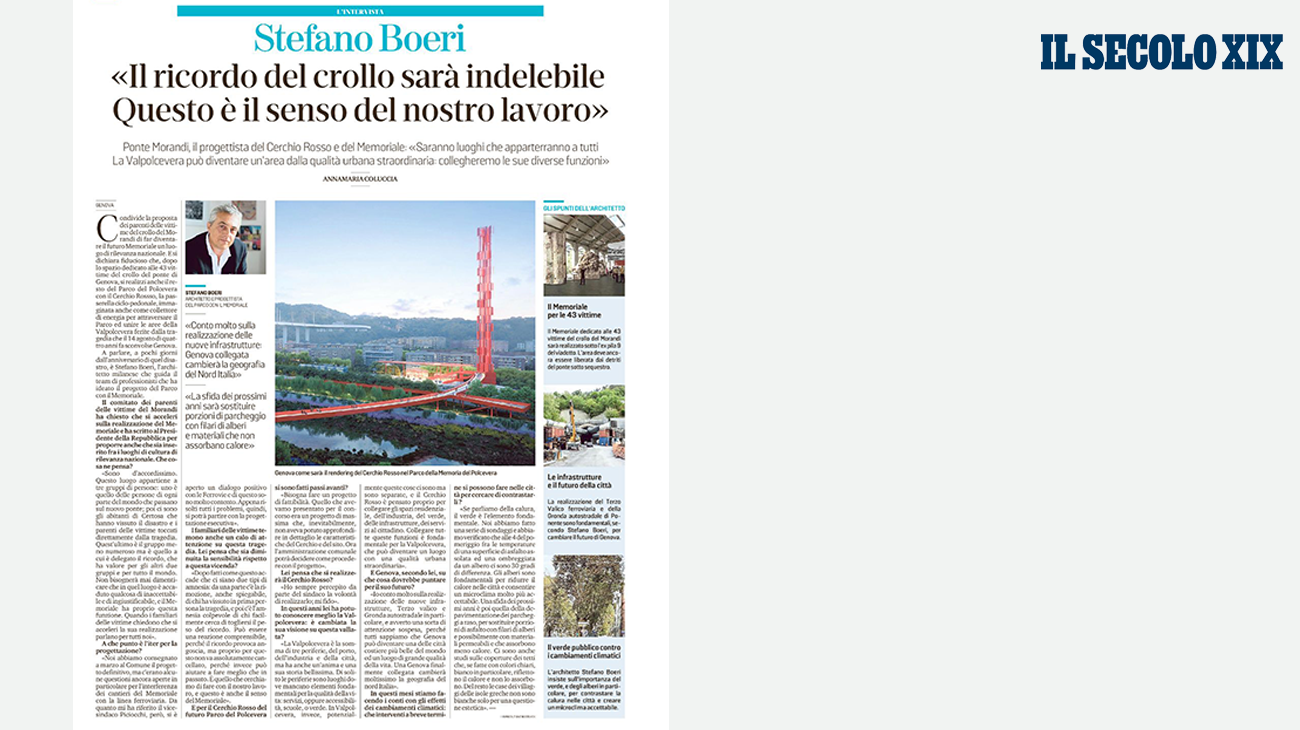 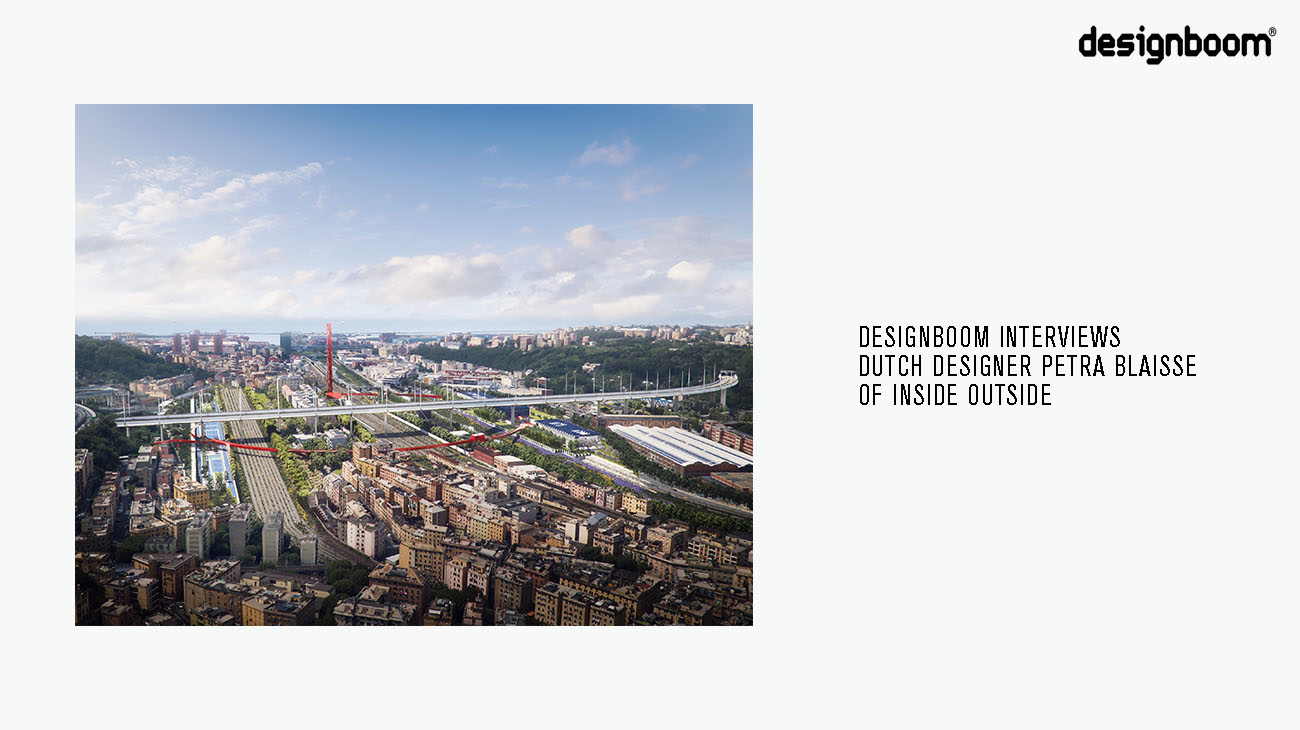