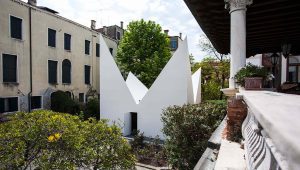 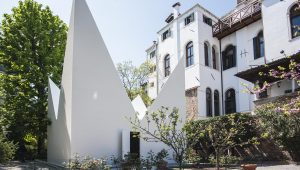 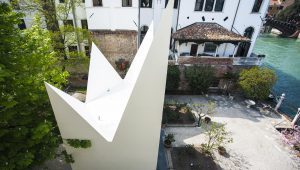 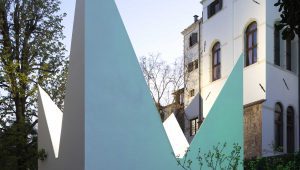 “Hanji” is the name given to a specific type of traditional Korean paper made from mulberry trees, also known as the “paper of a thousand years” because of its great strength.
Hanji House is the introductory pavilion to the exhibition Times Reimagined, dedicated to Korean artist Kwang Young Chun’s works as a collateral event for the 59th Venice Biennale. Located in the garden of Palazzo Balbi Valier, with access from Palazzo Contarini Polignac (Dorsoduro 874), Hanji House becomes a new temporary landmark for Venice, visible from the Grand Canal.

Its shape and identity derive from the ancient, playful yet meditative oriental practice of folding paper in an infinite number of ways. The basic principle of the game is to transform a flat sheet of paper into a complex three-dimensional shape, constantly challenging the stability of the structure through a series of metamorphoses. Hanji House is based on the unpredictability of creativity, but guided by mathematical precision: the pavilion is a mutating object that undergoes continuous transformations within itself through the play of light and shadow.

The shape is reminiscent of the ancient oriental practices of origami and tangram, as well as traditional Japanese and Korean houses based on a simple geometric modularity. In this case, the combination of volumes is articulated starting with four pyramids surmounting a parallelepiped, leaving a flat rhomboidal surface in the centre. Although perfectly symmetrical, Hanji House has a deliberate irregularity: one of the pyramids stands out, two metres higher than the others, breaking the balance of the forms. This “tower” recalls the idea of a lighthouse and at the same time echoes Venetian architecture: the entire pavilion evokes local forms, from the Gothic cathedral to the peculiar Renaissance style of the palaces, which wind their way from the Grand Canal to the inner part of the island. The image of the lighthouse, combined with that of the paper, also underlines both the object’s origin as a symbolic point of reference and its mutable, mobile aspect.
Light, the protagonist of the space, creates constantly changing effects: from the most natural daylight, which rotates around the pavilion, to the illuminations and projections at night, which question the very form of the structure from the inside, making it appear distorted and even making it stand out completely from the perspective of the Grand Canal.

Another inspiration for this object in the waters of Venice is one of the most memorable installations in the history of the Biennale: the Teatro del Mondo, designed by Aldo Rossi in 1980.
But the place where it is located, more than a destination, is to be considered a starting point for a future journey: Hanji House could be disassembled and reassembled, wherever its light might serve to attract and guide the gaze of visitors.
Just like a lightweight paper lantern, Hanji House can be folded, moved and adapted to different contexts as easily as a sheet of paper, with countless transformation possibilities still to be explored. All this can be possible thanks to an assessment of the life cycle of the pavilion and its materials, to ensure that the entire construction can be dismantled at the end of the exhibition and rebuilt elsewhere. The pavilion, conceived as a scaled version of a folding paper object, is based on the principle of “Paper-tree architecture”, coined by the artist Kwang Young Chun and referring to architecture using only wood and paper, which is widespread in traditional practice in Korea, China and Japan. The choice of material, therefore, is determined by the very characteristics of the paper the artist uses for his works and by a strong connection with nature. The structure is made of LVL wooden beams, an innovative material particularly resistant to bending and mechanical loads, which makes it possible to considerably reduce the section of the construction elements and therefore the amount of timber used.

Inside the Hanji House, an immersive, real-time interactive art installation was created by media artist Calvin J. Lee, who turned the triangular hanji packets created by artist Chun Kwan Young into virtual form, transforming the pavilion into a true “multidisciplinary laboratory”.
The envelope of the pavilion then becomes a vibrant white surface that invites contact, a surface that interacts with light and heat, giving Hanji House the appearance of a precious yet playful object, a beacon that illuminates both the splendid Renaissance architecture in which it is located and the works of art that surround it.