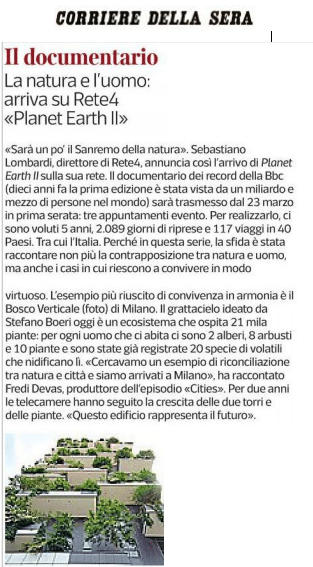 Nature and man: coming on Rete 4 Planet Earth II. Sebastiano Lombardi, director of channel Rete 4, announces the arrival of Planet Earth II on its network. The BBC (ten years, the first edition of documentary of records watched by a billion and a half people in the world) will be on air on March 23rd in prime time: 3 event dates. To achieve it, it took five years, 2,089 days of filming and 117 trips in 40 countries. Including Italy. Because in this series, the challenge was to tell no longer the opposition between nature and man, but also cases where they can live together in a virtuous way. The most successful example of living together in harmony is the Vertical Forest (photo) in Milan. The skyscraper designed by Stefano Boeri today is an ecosystem that is home to 21,000 plants: for every man who lives there are 2 trees, shrubs, and 8 and 10 plants have already been registered 20 species of birds that nest there. “We were looking for an example of reconciliation between nature and the city and arrived in Milan,” said Fredi Devas, the producer of episode “Cities“. For two years the cameras have followed the growth of the two towers and plants. “This building represents the future“.