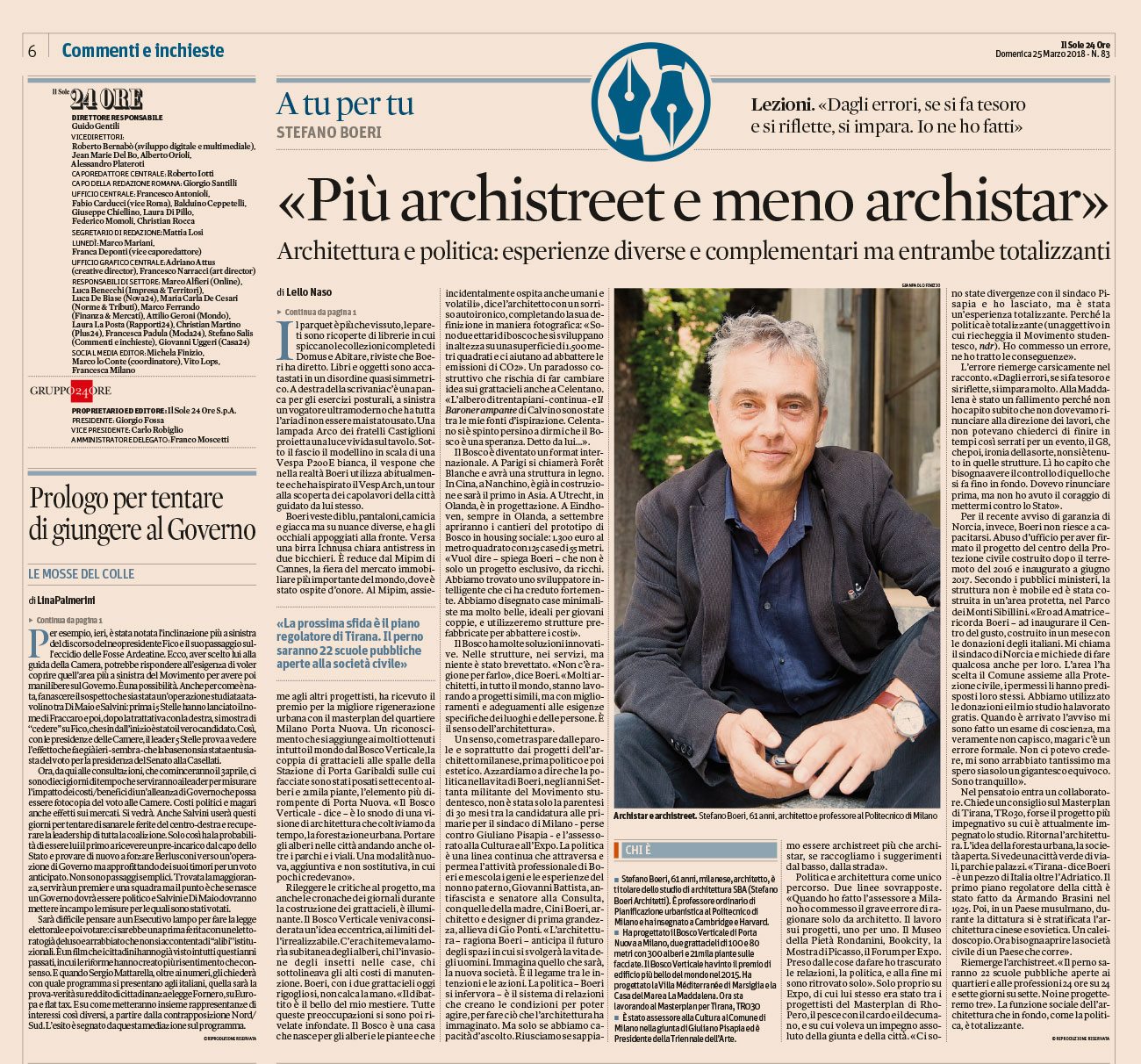 Polyedric personality of the Architect Boeri revealed by the journalist of “Il Sole 24 ore” Lello Naso who has visited the “think tank” and witnessed the life of Via Donizetti that never stops.

“Stefano Boeri emerges from a tour de force of meetings. It’s late evening, but the studio, a building of the beginning of past century in the Conservatory area, in Milan, is still full as if it was mid-morning. The architect’s room,” il pensatoio” (the “think tank”) as his collaborators call it ironically, is an octagon.

The parquet is more than consumed, the walls are covered with bookcases containing the complete collections of Domus and Abitare, magazines Boeri has directed. Books and objects are stacked in an almost symmetrical mess. To the right of the desk there is a bench for postural exercises, on the left an ultramodern rower that looks like it has never been used. An Arco lamp by Castiglioni brothers casts a glare on the table. Under the beam there’s a scale model of white Vespa P200E, a miniature of the scooter Boeri uses every day, which has inspired the VespArch, a tour to discover the masterpieces of the city guided by himself.

Boeri wears blue, trousers, shirt and jacket of different shades, and has glasses on the forehead. He pours light Ichnusa beer as an anti-stress remedy  into two glasses. He demonstrates some signs of tireness after Mipim in Cannes, the most important fair in the world’s real estate market, where he was honorable guest. At Mipim, together with the other designers, he received the award for the best urban regeneration project with the masterplan of Milan Porta Nuova district. A recognition added to many others obtained worldwide by Vertical Forest, a pair of skyscrapers behind  Porta Garibaldi Station hosting on its facades seven hundred trees and 21 thousand plants, the most disruptive element of Porta Nuova. «The Vertical Forest – he says – is the junction of architectural vision that we have been cultivating for some time, Urban Forestry. Bring the trees in the cities going even beyond the parks and avenues. A new, additional and non-substitutive way of conceiving urban greenery, in which few believed”.

Going through the criticisms of the project, but also the chronicles of the newspapers during the construction of the skyscrapers, is illuminating. Vertical Forest was considered an eccentric idea, almost unrealizable. Some feared the sudden death of trees, others the invasion of the insects in homes, some stressed the high maintenance costs. “The beauty of my job is in the debate. All these concerns turned out to be unfounded. The Vertical Forest is a house conceived for trees and plants and incidentally also hosts humans and birds,” says the architect with a self-ironic smile, completing his definition in a photographic way: “These towers are equal to two hectares of forest that grow in height over an area of ​​1,500 square meters and help us to reduce CO2 emissions». A constructive paradox that makes even Celentano change his idea about the skyscrapers. «The thirty-story tree – continues – and The Baron in the trees of Calvino were among my sources of inspiration. Celentano even went so far as to tell me that the Vertical Forest is a hope. … »

The Vertical Forest has become an international model. In Paris it will be called Forêt Blanche and will have a wooden structure. In China, in Nanjing, it is already under construction and will be the first in Asia. In Utrecht, in the Netherlands, it is being designed. In Eindhoven, also in the Netherlands, the construction of the Vertical Forest prototype in social housing will start next September: € 1,300 per square meter with 125 houses of 55 square meters each. “It means – explains Boeri – that it is not just an exclusive project, for the rich people. We found an intelligent developer who strongly believed in it. We have designed minimalist but very beautiful houses, ideal for young couples, and we will use prefabricated structures to reduce costs».

The Vertical Forest integrates many innovative solutions. In structures, in the services, but nothing has been patented. “There’s no reason to do it,” Boeri says . “Many architects, all over the world, are working on similar projects, but with improvements and adjustments to the specific needs of places and people. This is the meaning of architecture».

A sense, as reflected in the words and, above all, in the projects of the Milanese architect, first political and then aesthetic. We dare say that politics in Boeri’s life, who was a militant student in the seventies  movement, was not only the parenthesis of 30 months between the candidacy in the primaries for the mayor of Milan – lost against Giuliano Pisapia – and the Councilor chair at the Department of Culture and Expo. Politics is a continuous line that crosses and permeates the professional activity of Boeri and mixes the genes and experiences of the paternal grandfather, Giovanni Battista, antifascist and senator at the Consulta, with those of his mother, Cini Boeri, architect and designer of the first magnitude, a pupil of Gio Ponti.

«Architecture – Boeri reasons – anticipates the future of the spaces that will host the men’s life. It imagines what’s coming, the new society. It is the link between intentions and actions. Politics – Boeri is thrilled – is the system of relationships that creates the conditions enabling you to act, to do what architecture has imagined. But only if we have listening skills. We succeed if we know how to be an archistreet rather than an archistar, if we gather the suggestions from below, from the street ».

Politics and architecture as a single path. Two overlapping lines. «When I worked as councilor in Milan, I made a serious mistake by thinking only from the architect’s point of view. Working on projects, one by one. The Museum of Pietà Rondanini, Bookcity, the Picasso Exhibition, the Forum for Expo. Absorbed by the things to do I neglected relationships, politics, and in the end I found myself alone». Alone on Expo Rho-Pero Masterplan, which he himself had conceived together with the designers of the Advisory Board, the fish with the cardo and the decumanus, and for which he wanted an absolute commitment from the party and from the city. “There’ve been some principal disagreements with Mayor Pisapia and I left, but it was an all-encompassing experience. Because politics is all-encompassing (an adjective echoing the student movement ed). I made a mistake, I accepted the consequences».

The error re-emerges in the story. “From mistakes, if you learn and reflect, you learn a lot. La Maddalena project was a failure because I did not immediately understand that we did not have to give up the direction of the work, that they could not ask us to finish so hastily for the event, the G8, which then, ironically, was not held in those structures. There I understood that we must have major control of what we do until the end. I had to give up before, but I did not have the courage to oppose myself to the state”.

As for the recent Norcia warranty notice, however, Boeri is stupefied. Abuse of the office for having signed the project of the Civil Protection Center built after the 2016 earthquake and inaugurated in June 2017. According to the prosecutors, the structure is not temporary and was built in a protected area, in the Parco dei Monti Sibillini. «I was in Amatrice – recalls Boeri – to inaugurate the Food Area, built in just a month with donations of the italian people. The mayor of Norcia calls me and asks me to do something for them too. The area was chosen by the Municipality, together with the Civil Protection, they actually prepared the permits themselves. We used donations for the construction and my studio worked for free. When the warning arrived I examined myself, but I really do not understand, maybe there is a formal mistake. I could not believe it, I got angry a lot but I hope it’s just an enormous misunderstanding. I’m calm”.

A collaborator enters the “think tank”. He asks for an advice on the Tirana Masterplan, TR030, perhaps the most challenging project the studio is currently developing. Architecture’s back. The idea of ​​urban forest, the open society. You see a green city of avenues, parks and buildings. “Tirana – Boeri says – is a piece of Italy beyond the Adriatic. The first regulatory plan of the city was done by Armando Brasini in 1925. Then, in a Muslim country, during the dictatorship, the Chinese and Soviet architecture were stratified. A kaleidoscope. Now we need to open up the civil society of a country that runs”.

The archistreet re-emerges. “The pivot will be 22 public schools open to neighborhoods 24 hours a day, seven days a week. We will design three of them “. The social function of architecture which, in the end, like politics, is all-encompassing “.