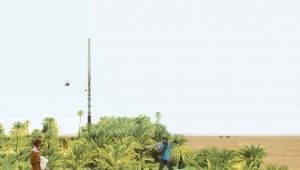 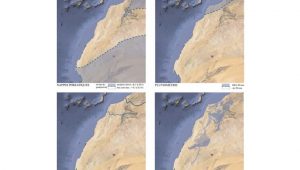 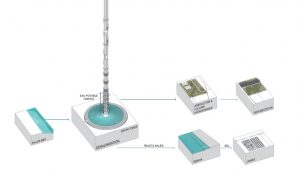 When we discussed with the team how to answer the question “Live in the desert” in the Moroccan pavilion of Milan Expo 2015, we imagined that the big issue of an immense territory, largely desert, is the collection and use of water. We tried to imagine what would mean to install on the Atlantic coast of Morocco, some towers 1 km high, which would work as major catalysts for renewable energy. These towers have also a symbolic value, because they tell of a great investment – scientific, technical, cultural, human – for the production of a key resource such as water, produced through a project of reverse osmosis desalination. But above all, they pump the water toward two internal ecosystems. In Sebkha, the regions where there are still a few lakes now completely devoid of water which would be reused in some way, and thanks to the water with low salt content, they could be used to produce disinfectants, in particular Amuchina.

The other ecosystem, instead, works on the possibility of having units of intensive cultivation. Overall, the idea is to get back to a scientific culture allowing us to understand what is the proper way to use water in this condition of total scarcity and try to make sure that this relationship between landscape, energy and water is an honest relationship, in which the presence of these large elements creates an element that also indicates the technical and financial effort of man to recover a healthy relationship with a key source for life.