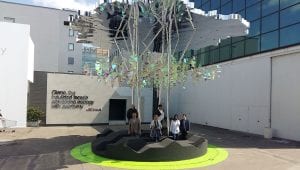 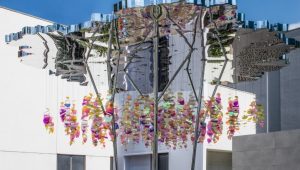 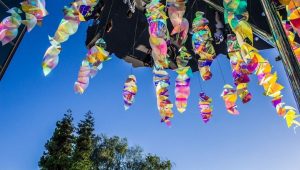 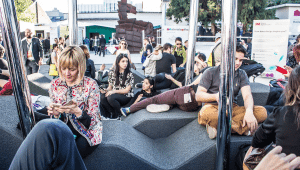 Designed for the 2016 edition of Milan Design Week – one of the essential events for creative professionals and designers around the world – the Urban Tree Lounge installation was created as part of the Superstudio in the Tortona district, one of the main epicentres of the entire Milanese event and theatre of constant interaction between people and energies for a whole week. The project stems from the idea of ​​giving life to a space that is both covered yet open to pedestrian flows, dynamic but immobile and thus the model of an artificial tree was created, offering peace and protection in its shade while at the same time being a mineral metaphor for the natural world and a conceptual prototype for a new kind of public space conceived not just for the future of Milan’s urban landscape but cities in a broader sense. On this occasion Stefano Boeri Architetti collaborated with 3M Design, applying the hi-tech coating materials and films supplied by the company in a highly original way thanks to a shared vision focused on sustainability. An object/space emerged from this interaction capable of being an experience at the same time: a place for interacting and comparing between thoughts and bodies, light and colours while minds (and mobile devices) can be recharged with new energies.

Like the organic plant organism which inspired it, the Urban Tree Lounge can be conceptually interpreted as a primary foundation site for a new idea of ​​a public city. Best summed up by an image that is both organic and abstract at the same time and with a strong visual impact, the installation comprises a structure made up of four main slender “trunks” in chrome-plated steel which expand upwards and out into eight secondary branches. At a height of six metres the “tree” has a cover with an abstract and almost two-dimensional projection in the shape of natural foliage with an irregular and jagged outline and an approximate diameter of 9 metres. Made of lightweight aluminium, the cover is coated on the underside and the edges with a 3M mirroring film which radiates sunlight during the day and making the image of the foliage impalpable and evanescent. The mirroring of people below this surface that “floats” six metres above is also a way of allowing them to empathize with the installation that surrounds them and to reflect (literally) on the nature and value of a break during the frenzy of the Milan event and, in a wider sense, on the contemporary city. Some of the leaves, made from a special 3M photo-luminescent material, are able to absorb daylight and recycle it during the twilight and at night: a solution that combines significant energy saving performance with a powerful visual effect.

At the same time, the outer curve of the cover is painted with a 3M material that can simultaneously ensure high absorption of sunlight and complete protection of the underlying metal structure from overheating. The artificial foliage of the Urban Tree Lounge has 50 holes through which the sunlight is filtered by the insertion of 3M films of various types and colours and which illuminate the space below with multicoloured games. The coloured rays also create an interplay with a series of delicate poetic corollas that resemble “flowers” suspended at mid-height, made up of multicoloured irregular elements. At the base of the installation developed by Stefano Boeri Architetti is an artificial, dark and opaque patch of ground that contrasts with the roof but which is equally stylized in its forms. This element defines the gentle outlines of a large, perfectly circular sofa 6 metres in diameter whose seating spaces are delineated by six side by side strips with alternating and undulating surfaces. Made of extruded polystyrene, the seats are covered in Nomad type non-slip vinyl material for outdoor use, also produced by 3M.