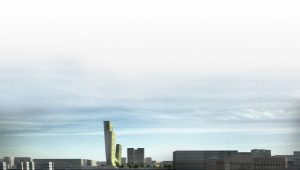 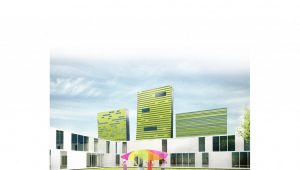 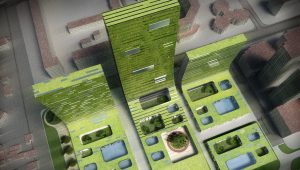 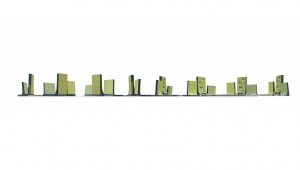 The Solid Waves project appears as a contemporary landmark and a system capable of combining residences, green spaces and public and commercial infrastructures. Its striking and unique presence can be read as a declaration of sustainability within the urban context, promoting social gathering and supporting the need for collective green spaces.

Solid Waves generates a residential urban park, full of living spaces, trees and areas offering a range of services combined in a single neighbourhood where functional programmes and nature coexist with each other and creating a new model for a symbiotic urban organism. The project also works on a variety of different scales: while the towers are visible from a distance and give a sense of structure to the position of the complex within the city in terms of views, a system of courtyards provides protected spaces that shield the inhabitants from adverse elements by maintaining a close relationship with the open spaces. Formally, the intervention is expressed as a horizontal and continuous ground-based platform that rises up and translates into the creation of three levels each with a different height and inclination.

The project concept linked to the planning behind Solid Waves embraces the concepts of densification, integration and analysis of the urban context in order to generate a space able to accommodate different functions and forms as well as different public and private urban bodies. The positioning of the three towers in the Northern portion of the site guarantees optimal light in the winter months and increases protection in the summer months, in addition to counteracting the strong local winds. The functional programme presents a combination that sees the positioning of commercial and public spaces, such as a school and an auditorium for example in the outermost areas of the site so as to exploit the wider and more frequented nature of the surrounding road system. The positioning of the residences at the heart of the project is complementary to this, alternating them with private green courtyards and thereby highlighting the human dimension while creating a greater sense of “neighbourhood”. Other spaces used as private residences are located inside the three towers which remain in continuous dialogue with those located on the ground floor thanks to the green elements placed on the façade and which cover the entire project. Inside the towers, on the first floors, commercial spaces and spaces used for semi-public services alternate in order to promote mobility and usability while protecting the private spaces above.

The green elements that appear like a real skin covering the buildings are divided into functions including sports areas, trees or places dedicated to leisure time, courtyards for  children’s games and play areas and public squares. The alternating of built elements, green spaces and mobility gives complexity and a high level of liveability to the intervention, enhancing both public and private and commercial and residential environments.

The height and slenderness of the towers, in addition to their cantilever shape, indicate the use of a static framework that allows a considerable reduction in mass while at the same time giving the structure the rigidity required: this goal has had to be achieved without losing sight of the need to maintain the largest available surface and therefore reduce the dimensions of each construction element as much as possible. The translation of these concepts led to the identification of a structural modular grid held in place and braced in the centre by the elements used for upwards and downwards movement, stairs and elevators, in reinforced concrete.

The façade system of the three towers has been conceived as a continuous vegetal element starting from the roofs of the lower spaces and continuing on all floors, made up of panels of a size equal to that of the individual floors, suspended directly from the slabs and able to contain all the layers necessary for the growth and maintenance of the green surface.