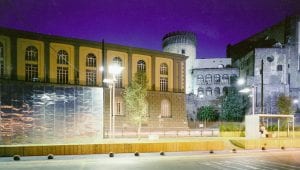 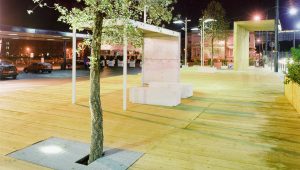 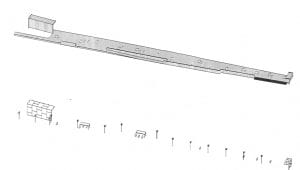 At the end of the 1990s the City of Naples planned to reconnect the old part of the city to its portside waterfront with a major urban renewal project aimed at creating a new seafront and breaking down the physical and ideological barriers in order to recreate that sense of unity between the sea and the city that had been lost over time. The project for the restructuring of the port, starting from the strategically important Molo Beverello area was intended to extend the works to the entire Naples docks, the road infrastructures and the service buildings. Stefano Boeri, who at that time was involved in the planning of other European waterfronts, was tasked by the Porto Antico Company with the development of the first symbolic step of this important urban transformation as a prerequisite for approval of the Triennial Operating Plan and the Master Regulatory Plan by installing a temporary public space near the cruise ship port in 1998.

It takes the form of a wooden walkway exclusively for pedestrian use which is 14 metres wide and 350 metres long with a supporting framework of steel pipes and which reaches the Maschio Angioino near to which it widens out becoming a real platform. Along the walkway, small wooden shelters and blocks of white marble have been installed as seats intended to be reference points and stop-offs for passing citizens and tourists along the new urban route.
The new footbridge replaces the Maschio Angioino wall and the Molo Beverello railings (both demolished) that clearly divided Palazzo San Giacomo, where the Town Hall was located from the Maritime Station and the Molo Beverello. The demolition of this barrier was not just a physical act but also an ideological standpoint on the new urban developments in the city, which considered the idea of integration between the two areas.

“Our Berlin Wall between the city and the sea has fallen. I am sure that Neapolitans will immediately take possession of this new area” declared the mayor of Naples on the occasion. Once the Maschio wall fell, the new opening was moved to the Immacolatella Vecchia area, followed by the pedestrianization of approximately 80,000 square metres of port area and the demolition of approximately 700 metres of customs walls. Furthermore, the area will include the construction of a museum for contemporary art in one of the old Magazzini Generali warehouses with the aim of providing the area with a cultural centre, thereby preventing it from remaining just a place of passage.

ClaimThe catwalk, worn away by time and the considerable number of people who used it has recently been dismantled. “Almost twenty years have passed” recalled the architect in 2015. “It was an incredible opportunity that was then just left in mid-air. Fortunately however we managed to achieve at least the opening of the port to the city. It was a miracle that we were able to demolish the wall that separated Naples from its Molo Beverello. Even then, our goal was to create a link to the sea in Piazza Municipio up to the Maritime Station which in my opinion should become a public facility. This was a dream resumed with the Alvaro Siza Town Hall Station that was a great walkway down to the sea: Naples deserves it. “