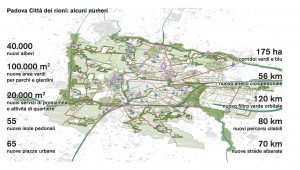 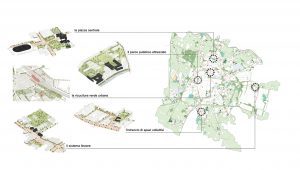 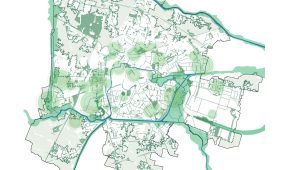 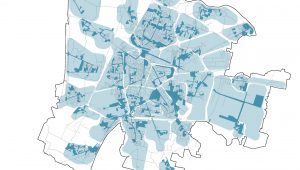 The main theme that guided the redaction of the new Piano degli Interventi originates from a different perspective compared to the models of the past: the regeneration of the city of Padua, starting from the citizens’ needs to improve the quality of urban life.
If the urban plan adopted in the post-war period, in fact, provided an expansionist vision based on a star-shaped development of new neighbourhoods around the historic centre, the new Piano degli Interventi, developed by Stefano Boeri Architetti and MATE Società Cooperativa, proposes an idea of urban design – intended not only as spatiality, but also as a method of social aggregation, of belonging – as an archipelago, where the fundamental element is the rione (the neighbourhood), and its “sea” is represented by the green system and the public mobility.

With a first phase of analysis, it was possible to redefine the rioni in 33 new centralities, that work as new epicentres for the local communities not only from a geographical and spatial point of view, but also according to historical criteria, identities and services. The main weaknesses of each one was then identified in order to undergo an ecological transition based on their morphological, spatial and social characteristics.
The heart of the rione is the public space, a micro-centrality that in many cases needs to be strengthened: where the problems concern the presence of abandoned or underused areas, the lack of spaces for aggregation or the discontinuity of bike paths, the goals of the Piano focus on sustainable mobility, reduction of land consumption, urban forestation, regeneration of urban quality and services to citizens. The target is to build the “city of 15 minutes”, a city where public green spaces and essential services are located within a 15-minute walking distance, accessible to all citizens.

The regeneration of Padua as a city of rioni starts from the application of this principle, and the actions of the Piano degli Interventi aim at the reduction of land consumption, with a decrease of 63% compared to the current plan and the regeneration of 550.000 square meters of underused areas; at the strengthening of public transport between the rioni, with 23 km of new tramways, 55 new pedestrian islands and the creation of a 56 km long orbital bike lane, which does not penalize public and private mobility and, at the same time, reconstitutes the city limits together with the forestation; and at the enhancement and implementation of the green system.

With the new project of public and agricultural green, the Piano degli Interventi tries to build the future identity of the city. Starting from the idea of the “green wedges” featured in the expansive configuration of the post-war period and never realized, the new Piano guarantees an increase of public green, with the enhancement and implementation of 170 hectares of green corridors, 100.000 sqm of new parks and public gardens, and the increase of the environmental quality in the urban setting with the planting of 40.000 new trees.

Overall, Padua could in the near future be provided with 16 hectares of new green areas for public use, a new network of pedestrian and cycle connections and a mixed network of residences and services for the citizens. The new Piano degli Interventi, therefore, with the redesign of the green areas, the public spaces and the mobility system – especially in the area of the Station – does not forcibly superimpose on the existing city a geography of social and physical spaces, but moves towards the complicity and the coexistence starting both from the revaluation of the historic rioni, legacies of the important urban history of Padua, as places of community, and the needs of the citizens, directly consulted through meetings, walks and bike rides, carried out in the territories of the 10 councils.

The numbers of the Piano degli Interventi:

350 ha of areas returned to agriculture

188 ha of private green areas where building is not permitted

55 ha of existing areas to be regenerated

27 ha of land cleared and transformed into green areas

175 ha of green and blue corridors