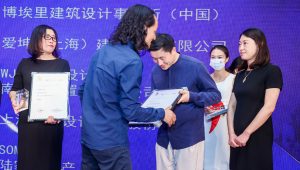 Located in the central Blloku district of Tirana in the immediate vicinity of the Albanian Government Presidential building, the West Residences project occupies a long narrow strip and stands on an important road artery with its shorter façade opening onto it, while the more extended façade looks out over a large public space within the urban fabric that allows it to enter into a direct dialogue with other public buildings in the area. The building is a composition of overlapping cubes, a series of slightly staggered independent residential modules so that each housing unit has at least one loggia or a balcony. This architectural solution allows different visual cones for each of the thirty apartments into which the building is divided so as to offer all the inhabitants a perception of the city of Tirana in its entirety. In addition, each housing unit is provided with double exposure to the outside in order to provide the maximum not only in terms of views but also and above all in terms of light and natural ventilation. The design of the structure also means that the apartments are not positioned directly on top of each other but that there is a second interplay with the result that the units of one floor are arranged so as to straddle two apartments on the floor below thereby giving rise to an intentional misalignment allowing the façade design to move.

There are two central structural elements that contain lifts and utilities and around which the layout of the apartments develops. These have the sleeping areas with the bedrooms facing North and the living and day areas open instead towards the South, thus being able to take advantage of a greater daily amount of natural light. The building’s foundation, which consists of the first two floors, is entirely open to the city by hosting a range of commercial and recreational activities that help to reinforce the connection of the entire project with the urban context. Even the use of materials underlines the evident difference between the ground and the upper floors and the alternating of stone surfaces and floor-to-ceiling windows that contribute to the relationship between inside and outside and between private and public spaces. The commercial area interacts with the public space through a continuous flooring that houses a small pocket garden characterized by trees arranged in regular rows and which is partly lawn and partly indigenous shrub-like bushes.

The rectangular shift of the residential units in both directions generates a façade characterized by staggered floors, where the overhangs give life to an interplay of full and empty spaces, underlined by the solid stone frames that highlight each housing unit and its specific unique nature. The glazed parapets of the loggias encourage the visual perception of the volumes themselves, which is made obvious in the smaller façades by the insertion of full height glazed floors that alternate with those clad in more protruding slabs. A façade detail, which enhances the material choice is the vertical outlining of the slabs which increases their movement and colour variation. The alternation of recessed volumes and projecting surfaces gives each interior environment and each housing unit the option of enjoying private outdoor spaces enriched with regular plant elements that further highlight the design of the façades and the material treatment.