A Green Promenade for Cagliari Seafront 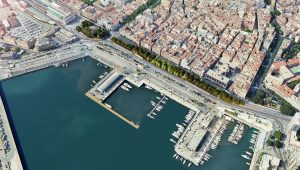 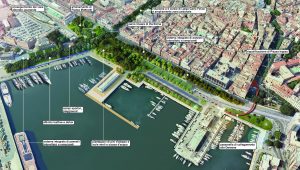 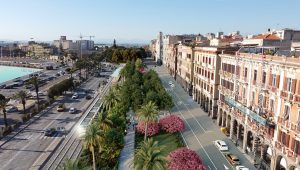 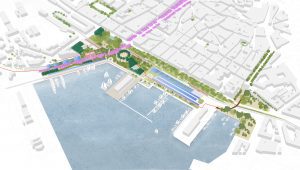 Development plan for the metropolitan city of cagliari, intermodal centre and regeneration of piazza matteotti and the central strip of via roma.

The project ‘A green promenade for Cagliari’s waterfront’ – presented by the temporary grouping of Stefano Boeri Architetti, MATE Società Cooperativa, MIC-HUB, StudioSilva, S.T.P, with the archaeologist Demis Massimiliano Murgia, following the tender won for the redefinition of Cagliari’s waterfront – envisages the redevelopment of the promenade in Via Roma, an intervention on the waterfront of the Port and the redevelopment of Piazza Matteotti.

At present, Cagliari’s waterfront, structurally determined by the presence of the port and the Marina district, is characterised by a strong and progressive soil sealing – with consequent negative effects also in terms of loss of biodiversity and the ‘heat island’ effect – and by the presence of a non-rationally ordered road system, which objectively represents an obstacle between the urban fabric and the sea.

The new urban and landscape intervention proposes to restore the social and environmental value of Cagliari’s seafront by means of a green promenade that recaptures the original 19th-century function of Via Roma. Starting from the Cagliari tradition of tree-lined avenues, the project defines a continuous, pedestrian and shaded public space that functions as a ‘green lung’ and connector element, both longitudinally between the FFSS station and Piazza Ingrao, and transversely – between the city and the sea.

Starting from transportation studies that have redesigned the mobility system, the project envisages the narrowing of two lanes on the main road to extend the city’s public space to the sea.

Thus, the new promenade triggers the creation of a new park and a space open to the city, becoming an element of connection between the waterfront and the main public functions overlooking it, enhancing the entire area from a cultural, social and environmental point of view.

In particular, the design intervention aims at enhancing the area’s mixité character, to implement social inclusion and community cohesion, creating new epicenters of collective life also in anticipation of the area’s development towards the port.

Great relevance is given to greenery, in line with the city’s urban reforestation philosophy, to protect biodiversity, combat the effects of climate change and purify the air: with the planting of more than 200 new trees – in addition to the maintenance of all the existing tree component – and approximately 5.700 square meters of green areas, the creation of a new city park is guaranteed, easily accessible from the entire Via Roma front. By doing so, the project significantly contributes to increasing the presence of greenery, capable of retaining fine dust and absorbing CO2, as well as reducing the “heat island” effect and mitigating the microclimate.

Respecting the spirit of the site, the project – through the careful selection of plant essences, mineral materials and street furniture – aims to create a coherent system, capable of restoring a uniform and identity-based perception of the place, thus overcoming the inhomogeneity and disorder of the current state. The intervention context, dense with symbols and history, is in fact located in a dynamic intermodal urban space that is destined to act as the main gateway to the city. A space that can be translated into a ‘linear botanical garden’ in which the history of Cagliari, its contaminations and its cosmopolitan character can also be recognised.

The promenade project is set in the context of a potential general masterplan, which brings together the interventions and projects envisaged by the strategic and urban planning of the municipality, as well as by other bodies such as the Port System Authority.

In particular, the plan foresees the implementation of sustainable mobility based on the principles of proximity and pedestrianism. In fact, a network of paths will connect and animate all the green areas with the rest of the Marina district, so that the entire park will become an efficient urban and social connector between the urban fabric and the sea, recovering a relationship that was hitherto denied.

In this framework, the interventions on Largo Carlo Felice and Viale Regina Margherita play a pivotal role in reconnecting the sea to the city, establishing a direct connection with the Castle.

Among the other nodal elements of the Masterplan, the ‘Piazza sul Mare’ represents a public space usable by all, in continuity with the tree-lined avenue, with sports fields (in the new ‘rambla dello sport’), recreational areas and dehors for rest and relaxation.

The masterplan also includes as suggestions a footbridge connecting Piazza Ingrao with the old port, renewed in its primary structures, and an intermodal transit hub near the railway station.

Starting with sustainable strategies including energy production from renewable sources – through the use of photovoltaic panels that could ensure the community’s energy self-sufficiency – and clean mobility, the masterplan would make Cagliari’s waterfront a new public centrality, accessible to the city and innovative, renewing its identity value.

The numbers of the feasibility project