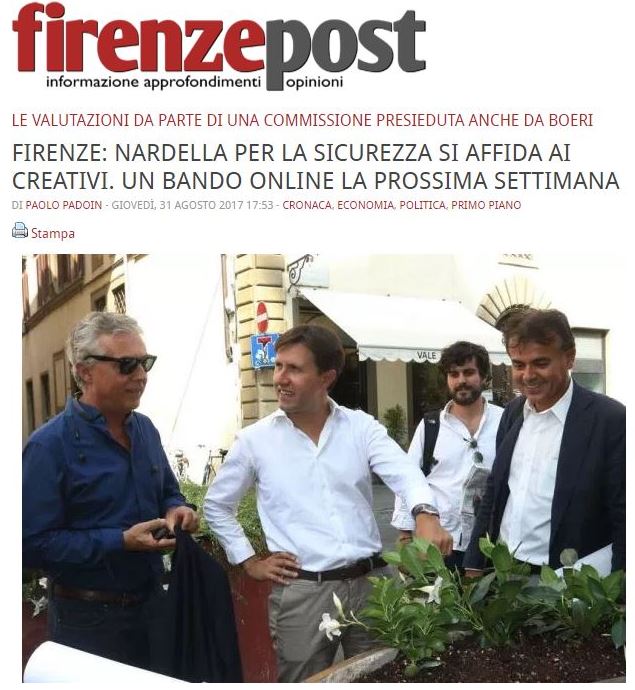 Following the proposal of Stefano Boeri, the Municipality of Florence, based on the indications of the Provincial Committee for Public Order and Security, will launch a public consultation aimed at companies, designers, creative and professional studios for the implementation of deterrent and elements protection and safety of public spaces in the city. Architect Boeri is called to chair together with the Mayor Nardella the commission, which will work to enhance the most effective and innovative proposals and to promote its real use in Florence and in other Italian and European cities that have shown an interest in combining safety with quality.

“The terrorist attacks in Barcelona, ​​London, Nice and Berlin have hit peaceful citizens and tourists as they inhabited squares and public places in our cities – said Boeri -. The purpose of these attacks is to intimidate us, to lock ourselves in our private homes, to move away from those open and beautiful places that are the squares and collective places of European cities, spaces to meeting, festivals, cultural sharing. Exactly those values ​​that the charms of the fundamentalist terrorism would want to erase. It is a matter of security – he said – it is urgent to ensure the safety of these places. But we cannot allow security to transform thousands of European squares and public spaces in overcrowded areas of barriers and concrete blocks, as if they were military checkpoints. We should not permit the denial of the beauty, the social and cultural vitality of thousands and thousands of European squares, by a scattered group of assassins. For these reasons, the City of Florence, after promptly securing its public spaces, intends to study and propose innovative solutions that transform safety devices into elements of containment of green and urban furnishings quality”.