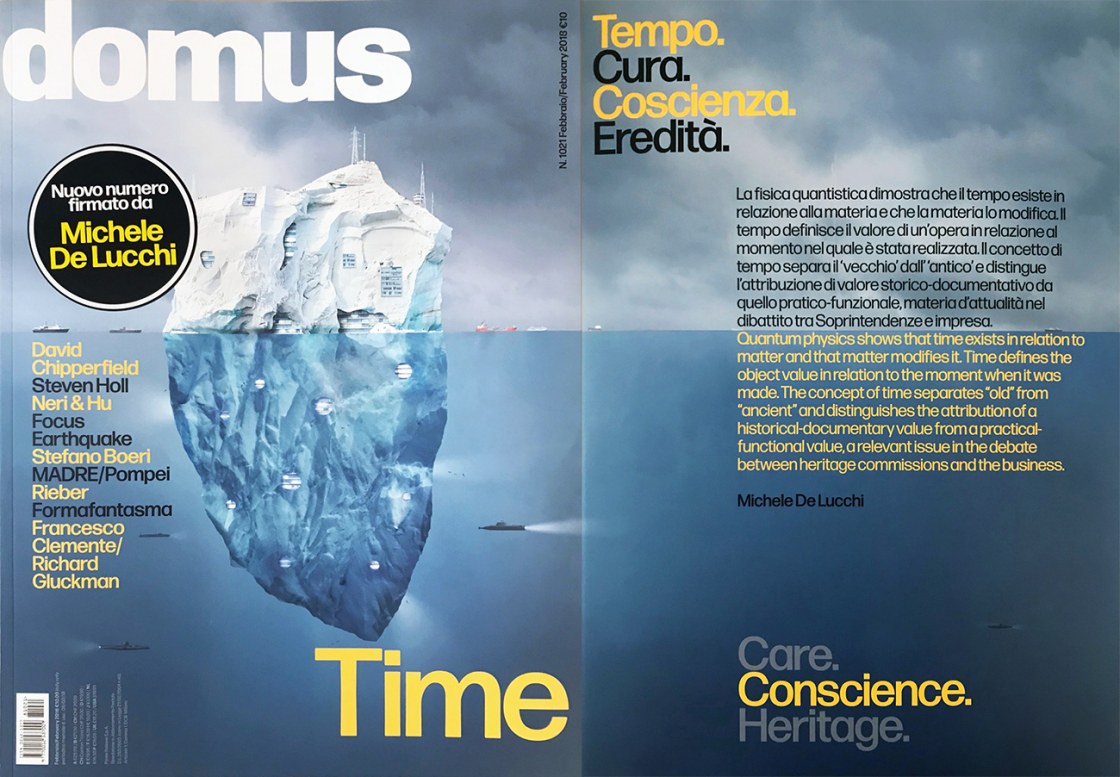 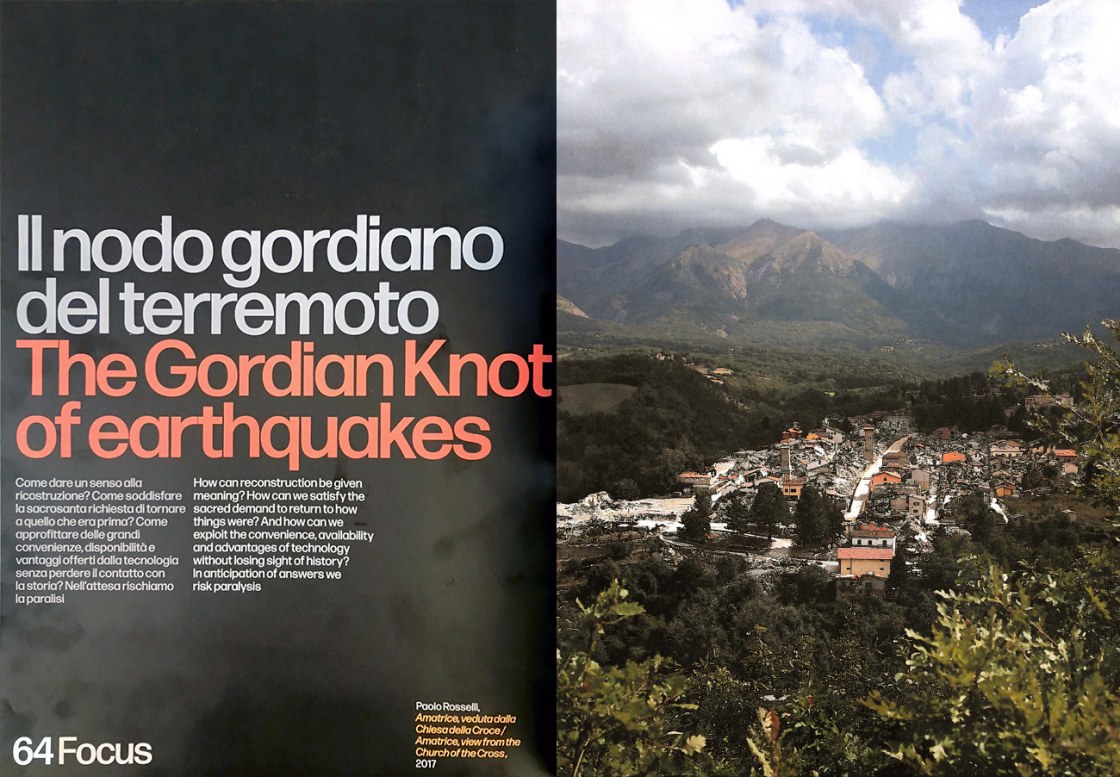 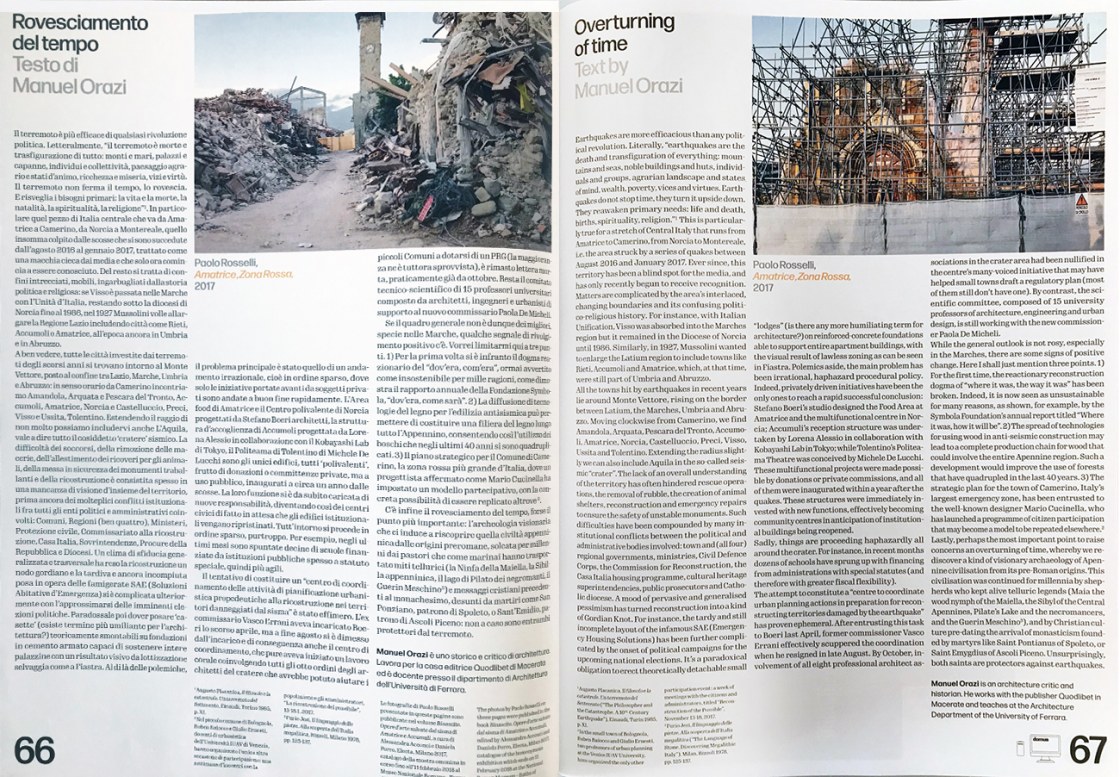 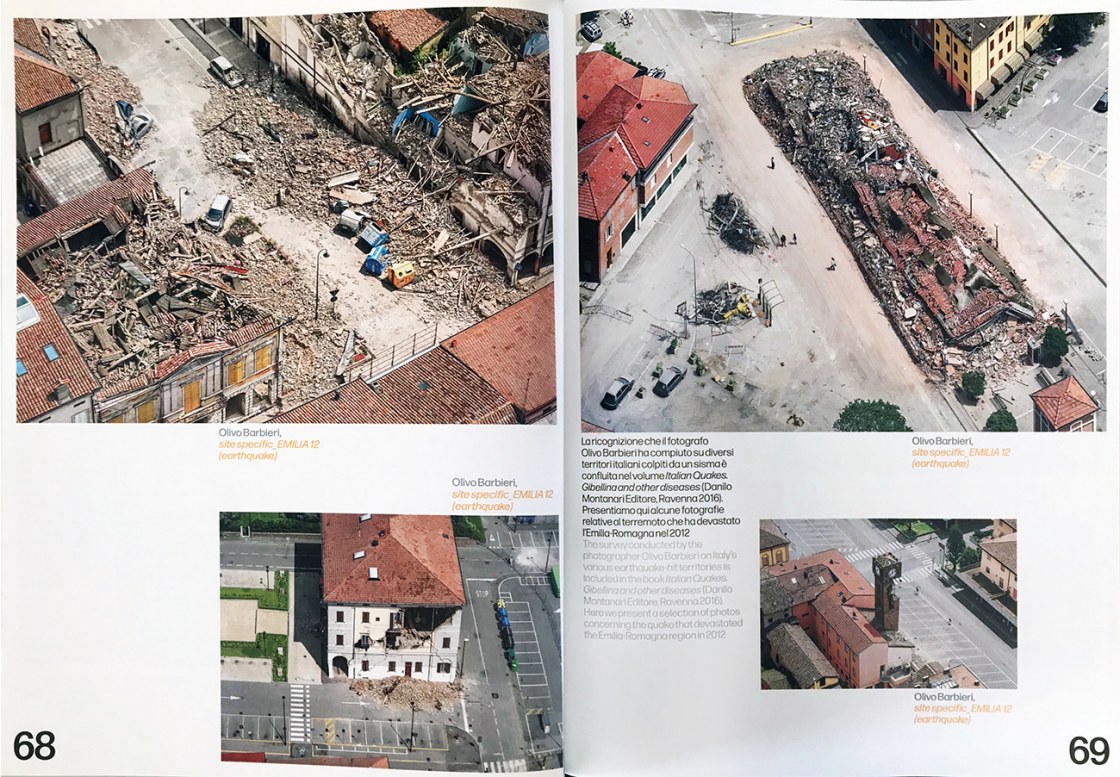 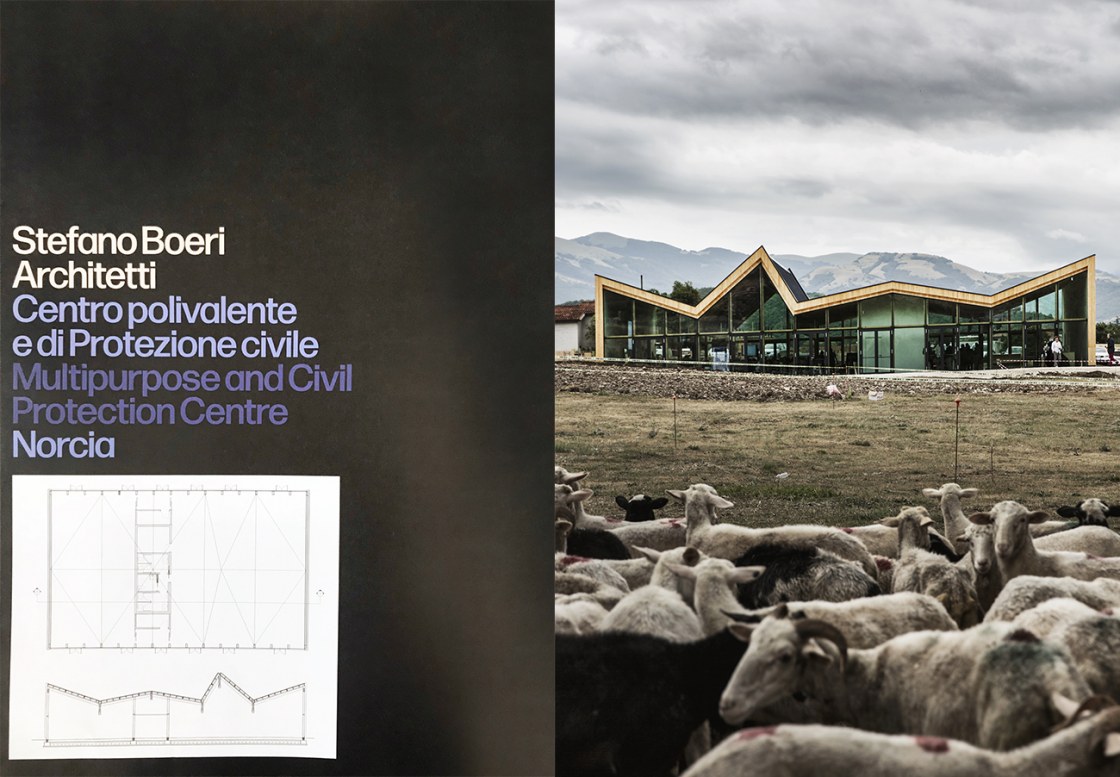 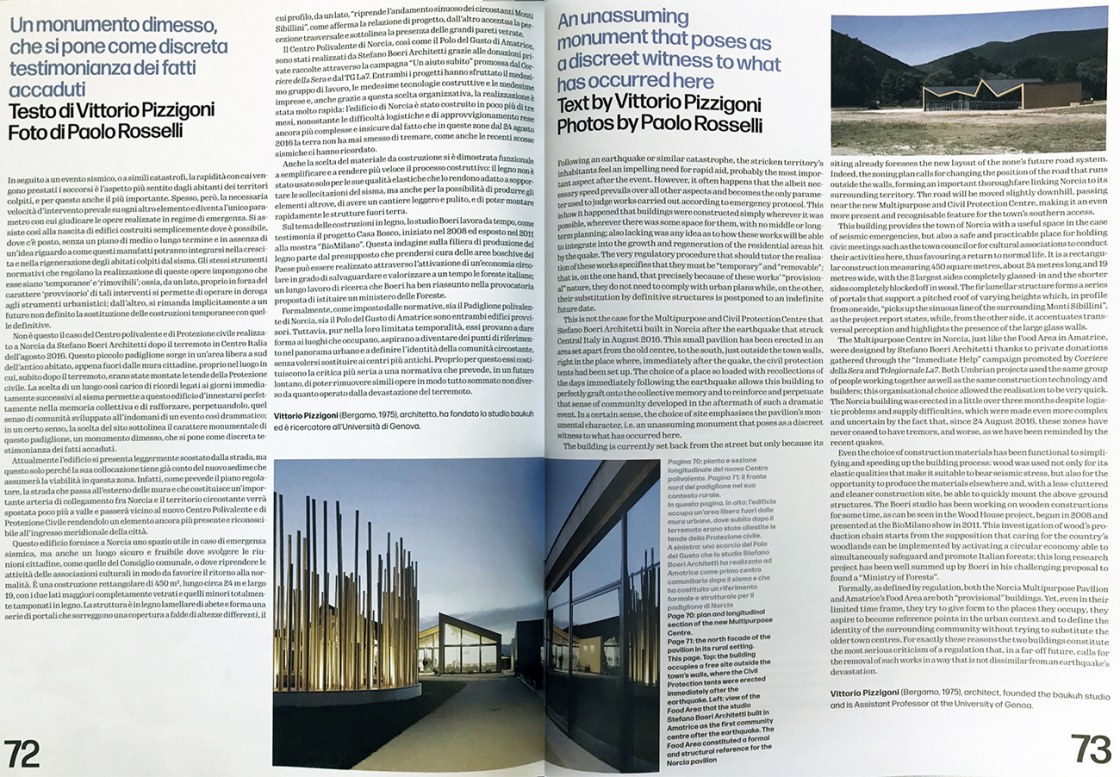 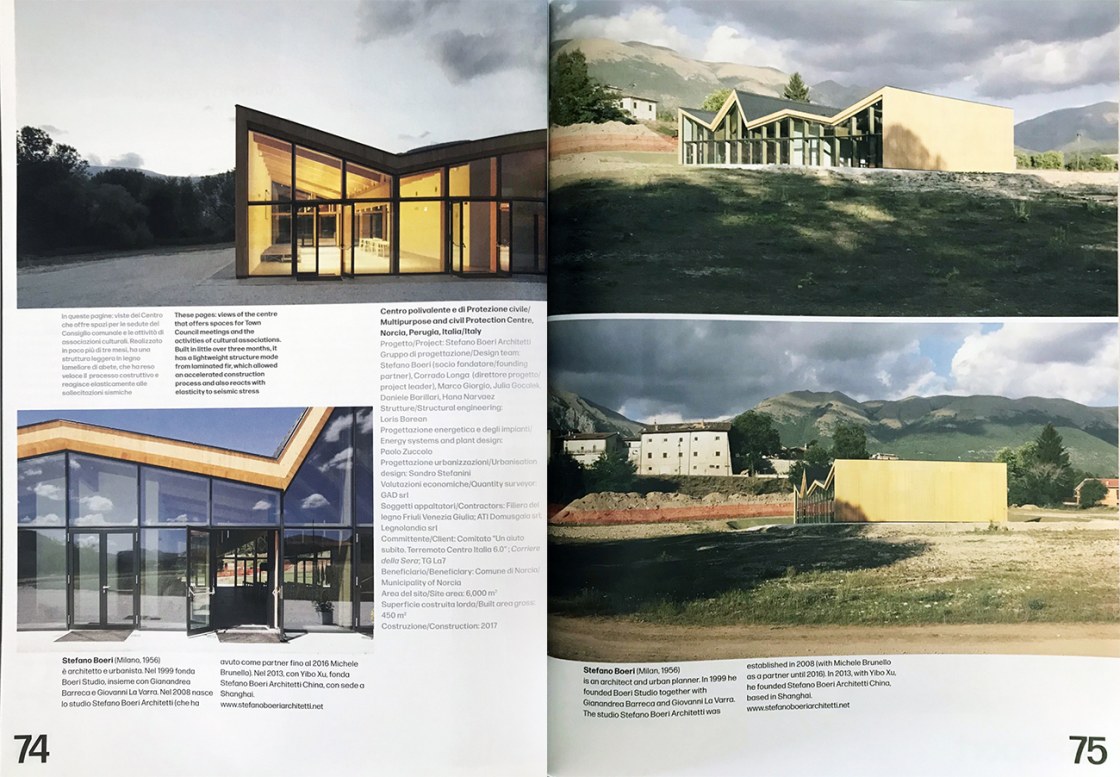 Post-earthquake reconstruction in context of reflection on time and on the concepts of care, conscience and legacy. The earthquake is an “overthrow of time”, writes Manuel Orazi facing “the Gordian knot of the earthquake”. The need to rebuild after the catastrophe raises important questions: how can reconstruction be given meaning? How to reconcile the request of returning to what was before with the urgency of security? How to look to the future without losing sight of history?
Instead of following the dogma “where it was, how it was”, Stefano Boeri’s design approach considered “where it was, how it will be”.

The Food Area of Amatrice and the Polyvalent and Civil Protection Center of Norcia designed by Stefano Boeri Architetti represented a concrete and immediate response to the primary needs of the community hit by the earthquake, realized and delivered to the citizenship within a few months, with significant efforts in the design and construction of structures, made possible thanks to solidarity and funds raised by the “Un Aiuto Subito” campaign promoted by Corriere della Sera and Tg La7.

Domus dedicates a large space to further study – edited by Vittorio Pizzigoni – on the Multipurpose and Civil Protection Center of Norcia: “an unassuming monument that poses as a discreet witness to what has occured here”.

“This small pavilion has been erected in an area set apart from the old centre, to the south, just outside the town walls, right in the place where, immediately after the quake, the civil protection tents had been set up. The choice of a place so loaded with recollections of the days immediately following the earthquake allows this building to perfectly graft onto the collective memory and to reinforce and perpetuate that sense of community developed in the aftermath of such a dramatic event.

The choice of construction materials has been functional to simplifying and speeding up the building process: wood was used not only for its elastic qualities that make it suitable to bear seismic stress, bur also for the opportunity to produce materials elsewhere and, with less-cluttered and cleaner construction site, be able to quickly mount the above-ground structures.

Stefano Boeri Architetti has been working on wooden constructions for some time,as can be seen in the Wooden House project, begun in 2008 and presented at the Biomilano show in 2011. This investigation of wood production chain starts from the supposition that caring for the country’s woodlands can be implemented by activating a circular economy able to simultaneously safeguard and promote Italian forests; this long research project has been well summed up by Boeri in his challenging proposal to found a “Ministry of Forests”.

Both the Norcia Multipurpose Pavilion and Amatrice’s Food Area are “provisional” buildings.  Yet, even in their limited frame time, they try to give form to the places thay occupy, they aspire to become reference points in the urban context and to define the identity of the surrounding community without trying to substitute the older town centers”.