HomeHighlights corriere della sera | the forests in our cities

corriere della sera
the forests in our cities 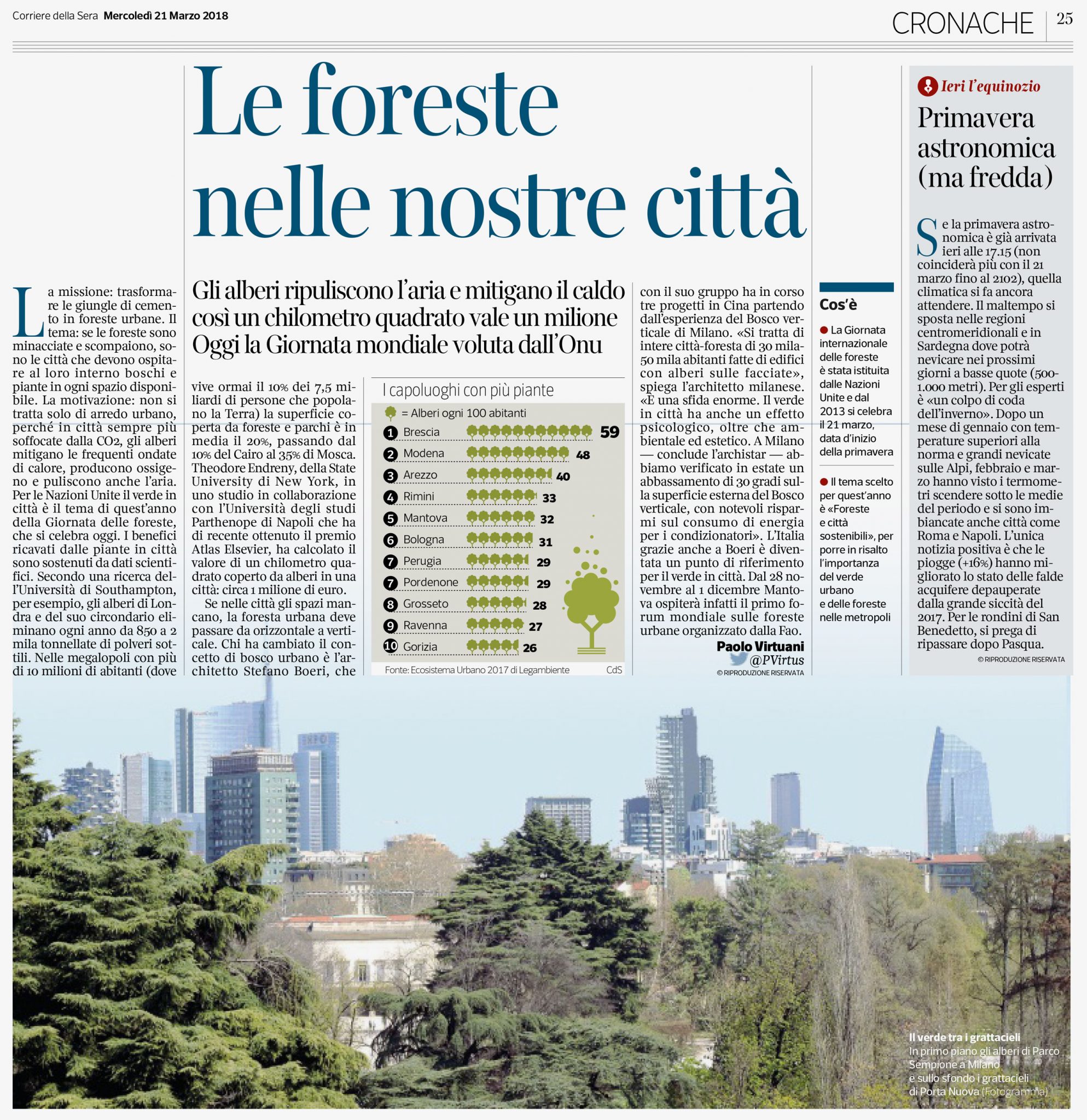 While the cities lack spaces, the urban forest has to mute from horizontal to vertical. The one who changed the concept of urban forest is the architect Stefano Boeri, who is currently developing, together with his studio three projects in China, following the experience of Vertical Forest in Milan. “We are designing entire forest cities for 30,000 to 50,000 inhabitants made of buildings hosting the trees on the facades,” explains the Milanese architect.
“It’s a huge challenge. Greenery in the city has a psychological effect, as well as environmental and aesthetic. In Milan – concludes the archistar – we have verified a 30 degrees temperature reduction on the external surface of Vertical Forest in summer, which leads to significant savings on the consumption of energy for air conditioning». Thanks not least to Boeri, Italy has become a reference point for the urban forestry worldwide. From November 28th to December 1st Mantova will host the first World Forum on Urban Forests organized by FAO.

The trees clean up the air and mitigate the heat, so a square kilometer is worth a million. Today the International Day of Forests proclaimed  by the UN.

Mission: transform the concrete jungles into urban forests. Theme: while the forests are threatened and disappear, the cities have to host woods and plants in every available space. Motivation: it is not just about urban furniture, because in cities increasingly suffocated by CO2, the trees mitigate the frequent heat waves, produce oxygen and also purify the air.
For the United Nations, Urban Forestry is the theme of this year’s World Forest Day, which is celebrated today. The benefits deriving from the presence of plants in the city are supported by scientific research. According to the study of the University of Southampton, for example, the trees of London and its surrounding area eliminate 850 to 2 thousand tons of fine dust each year. In the megacities with more than 10 million inhabitants (where nowadays 10% of the 7.5 billion people inhabiting the Earth live) the surface covered by forests and parks is of an average 20%, going from 10% of Cairo to 35 % of Moscow.

Theodore Endreny, from the State University of New York, in a research carried out in collaboration with the University of Naples Parthenope that has recently obtained the Atlas Elsevier award, has calculated the value of a square kilometer covered by trees in a city: about 1 million euros.