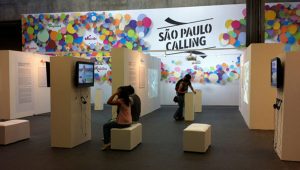 Promoted by the Social Housing Agency, São Paulo Calling is a research project developed between January and June 2012 to discuss the policies undertaken by the Municipality of São Paulo and those implemented by other metropolis that, in different and distant parts of the planet, are facing today the big issues of informal settlements.

For six months, a touring exhibition has explored the characteristics, the differences and the causes of informal settlements in São Paulo, Rome, Nairobi, Medellin, Mumbai, Moscow and Baghdad.