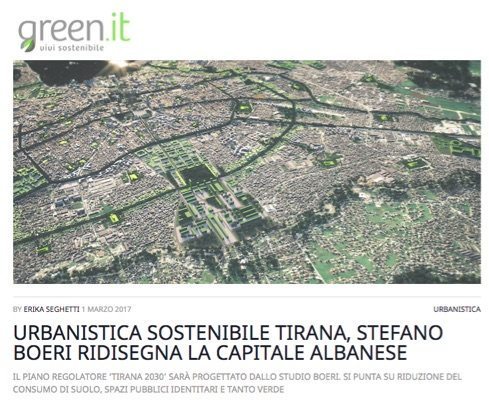 A city that takes possession of the space in order to optimize the environmental and urban context. This seems to be the vision behind the new town plan projected by Stefano Boeri’s team for Tirana, in Albania.
Work started in 2015, when the studio Stefano Boeri Architetti, in collaboration with the Dutch Unlab and Ind – Inter.National.Design, won the international competition launched by the Albanian government. And now it came the approval by the City Council of the capital: the new plan, called “Tirana 2030” (https://vimeo.com/198995886) will start. After almost a century by the plan designed by Armando Brasini, Italians return to redesign the urban future of the city of Tirana. The plan for Tirana consists of three parts: a general vision, called Affresco Metropolitano, focused on ten major themes (biodiversity, polycentric, diffuse knowledge, mobility, water, geopolitics, tourism, accessibility, agriculture, energy); another containing 13 strategic projects to be developed, called Atlante and finally a list of Rules to implement the urban projects, developed around five metabolic systems (nature, infrastructure, cities, agriculture, water).