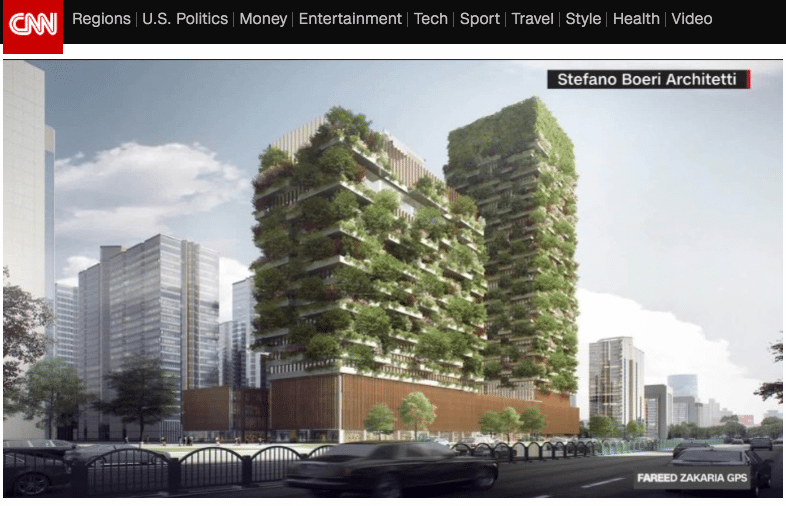 The Nanjing Vertical Forest by Stefano Boeri Architetti on CNN, in the report by Fareed Zakaria for GPS.

China has been trying for years to figure out a way to combat its dense, choking pollution. One answer, a Vertical Forest.
Last month time-lapsed video of this thick, gray smog rolling into Beijing went viral. It was a scary site, especially knowing that, by some estimates, more than a million people die in China from dirty air every year.
But China’s war on pollution may soon reach new heights, at least in one place. Take a look at this rendering of a Vertical Forest. Designed by the Italian Stefano Boeri Architetti, these proposed towers to be built in Nanjing will be coated with 1,100 trees and 2,500 plants and shrubs. The cascading plants of varying species will combat pollution by providing 25 tons of CO2 absorption every year, producing more than 130 pounds of oxygen every day.
And this isn’t the only carbon-eating building in the region. Construction on this plant-covered residential complex in Taipei will be completed this fall.
So it seems this is just the beginning of tree-buildings growing in China. In fact, the architect Stefano Boeri unveiled plans for a Forest City, as the Guardian pointed out. Here’s hoping urban China will one day be blanketed by green shrubs and trees, not gray smog and toxins”.