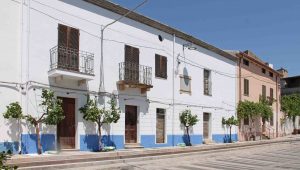 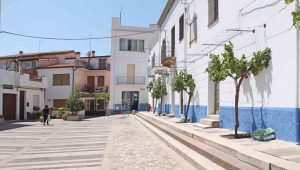 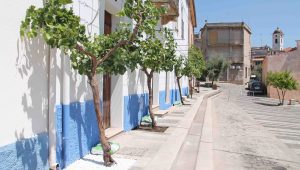 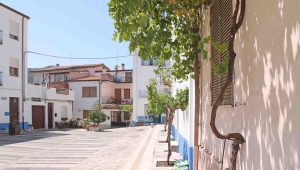 Conceived by Costantino Nivola in 1953, the Orani Pergola Village project was born as a work of environmental art intended to strengthen the sense of community of citizens by uniting the houses of the town to each other by means of pergolas, transforming the streets into intimate spaces, liveable collectively by the inhabitants; only the square – adorned with sculptures – was to remain uncovered to emphasize the typical Mediterranean use of a large enclosed room in the city. Blue plinth and green pergolas are both signs intended to highlight and strengthen the social bond between individuals. Like the pergola, the strip of color that was to join the houses together transferred the idea of ​​a cohesive and supportive community on an aesthetic level, capable of making the city a harmonious space for common life. Stefano Boeri Architetti takes up the concept expressed by Nivola in his project, deepening it and bringing it back to light, in a collaboration also implemented with local artisan realities, with the aim of activating the community and principles of inclusion.

The project for Orani is divided into different design options, in relation to the existing urban environment, varying the structure and layout of the pergolas to differentiate the facades and elements that follow one another in the historic center of the small Sardinian town.

The glimpses and plant grafts are emphasized by a careful choice of climbing elements with different chromatic effects – such as wisteria, bougainvillea or vine – in order to emphasize the variation of the colors in relation to the succession of the seasons.

The third option involves an intervention at an intermediate height between the height of the eaves of the lowest building and that of the lowest building, maintaining the same structure as the second type presented; the last option, on the other hand, involves a floor composed of cables and tie rods, which follows the course of the profiles of the houses, thus showing itself straight or inclined, depending on the relationship between the curtains facing each other.

The intervention generates urban interiors made up of existing facades and a fifth façade of living nature that varies with growth and with the seasons, decreasing the “heat island” effect within the streets of the historic center and giving the citizenship of the paths of shadows and lights among the leaves. Within the urban fabric, according to the morphology, the different pergolas can be placed side by side, in a succession of lowered or sloping floors between blossoming flowers and ripe fruit. The choice of vines and plants also takes into account the speed of their growth, in order to generate landscapes that are always renewed and rich in colors and scents. The implementation of the project conceived by Nivola will makes of Orani a splendid example of the regeneration of those Italian villages rich in history, culture and memory, scattered throughout the country, today at risk of being forgotten. Orani Pergola Village shows itself as a discreet intervention, yet able to involve citizens in an international cultural network and to translate the desire to experience collective and outdoor urban spaces into a project.

The realization of the project is intended as a further opportunity to reorganize the mobility and viability of the historical center: the streets of historical and cultural interest, in fact, can be gradually pedestrianized, while the urban voids used as spaces for parking organized for cars. The presence of the pergola and a carefully designed urban furniture – in a system of masonry pots and public seats – allows to create a comfortable and shady environment to make it possible for residents to reach their homes and all services.