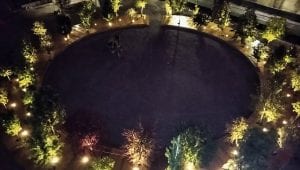 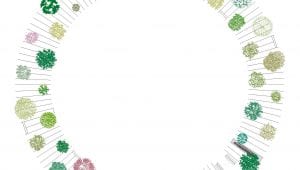 The RADURA DELLA MEMORIA is a project conceived by Inside Outside | Petra Blaisse, Stefano Boeri Architetti and Luca Vitone with the participation of Studio Laura Gatti and Metrogramma which precedes the GENOVA NEL BOSCO work.

The installation of Radura della Memoria is a project conceived by Stefano Boeri Architetti, Inside Outside | Petra Blaisse and Luca Vitone, with the participation of Studio Laura Gatti and Metrogramma, dedicated to the 43 victims of the tragedy of the collapsed Morandi Bridge, that happened in August 2018.

The Radura is the manifesto of the first rebirth gesture in the neighbourhood and anticipates the work Genova nel Bosco, thus linking the memory of the victims and their families and the overall vision of the future park.

The intervention consists of a circular wooden podium with a diameter of 50 m, inside which 43 different tree species are placed. The trees variety recalls the typical biodiversity of the Mediterranean scrub and the radial composition is made up of a wooden structure obtained from felled trees on 29 October 2018 by the Vaia storm that hit the North-East of Italy and all the Carnic forests.

The installation – which will remain available to the city until the realization of the Polcevera Park project and then be dismantled and reused in all its components – shows constant attention to climate change and the ecological impact of the choice of materials.

The trees, with their roots wrapped in protective fibres, are placed in large pots for acclimatization, favouring the creation of an intimate space suitable for meditation and reading. The podium, easily and publicly accessible, invites to commemorate and stop in the shade of the branches of different shapes and colours. The south-facing opening allows visitors to reach the heart of the installation.

The circular wooden podium as well as being a path slightly raised from the ground, is in itself a place to stop. The structure is 45 cm high and 6.50 m wide and can be accessed through steps distributed both on the external and internal side, inviting you to experiment in the shade of all the various trees.

The Radura della Memoria is also a large element of urban design dedicated to the community and easily usable by the citizens, in total respect of the memory of the victims of the collapse: integrated in its surface, in fact, there is a thin steel plate that reports the names of the 43 people who died and which makes the installation first of all a place of commemoration.

The Radura is housed in a wider open space, of which the trees act as a permeable scenic backdrop: the future square between via Fillak and Via Porro is set up on a temporary basis by remodeling the area currently occupied by the bridge construction site and marking a stone path leading to the Radura from the east; in the heart of the circle there will instead be a darker coloring treatment.

At night, the Radura della Memoria turns into a suggestive landmark and landscape of lights and shadows thanks to the luminous spots positioned along the circular platform and under the foliage of the trees, making the urban element a reality capable of telling the passage of time, the succession of days and seasons.

The Radura della Memoria – also defined in collaboration with the Committee of the relatives of the victims of Ponte Morandi – anticipates the new system of parks and public spaces that will also house the Memorial with the Mediterranean Biodiversity Greenhouse, the Green Factory, and the Cerchio Rosso – a new cycle-pedestrian and energy infrastructure – in a symbolic and manifest system of an urban mending between the banks of the Polcevera valley. The Polcevera Park and the Red Circle created by the temporary group made up of Stefano Boeri Architetti, team leader of the design team, Metrogramma by Andrea Boschetti, Inside Outside by Petra Blaisse, with Mobility in Chain, Transsolar Energietechnik, Studio Laura Gatti, Secondo Antonio Accotto, and the specialist consultancy of H&A Associati, Temporiuso and the artist Luca Vitone, is developing through a participatory process, with the direction of the Municipality of Genoa, the Department of Urban Planning and Urban Lab, involving citizenship and a series of public and private subjects, stakeholders (first of all, the Committee of the victims’ family members, the citizens of Via Porro and Via Fillak and of Certosa, the schools and the Town Hall, the Region, RFI, Confindustria, FILSE, Ansaldo Energia, San Giorgio Seigen, IRETI, etc.).