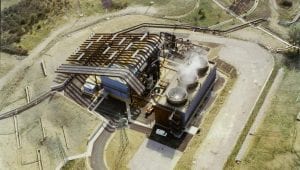 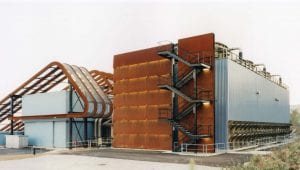 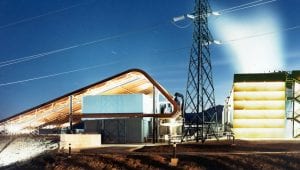 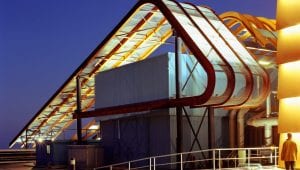 In 1998 ENEL entrusted Stefano Boeri with the task of giving one of its geothermal power plants a new identity that could coexist with the territory in which it was located and reducing its visual and panoramic impact. We are on the slopes of Mount Amiata in Tuscany, in Santa Fiora, known since time immemorial for the presence of underground steam deposits, used during the twentieth century for spas and in more recent years to produce electricity.

The intervention consists of a new technological outer casing that literally envelops the pre-existing system and which is not intended to disguise or conceal the power plant: rather, the intention is to integrate the structure into the landscape by making it a recognizable landmark. The concept of inclusion in fact is the central theme of the entire design and is resolved on two different levels, one concerning the landscape and one regarding the different constituent volumes of the plant itself.
The profile of the outer casing follows the curvilinear geography of the surrounding hills which runs in parallel to the flat terrain on which the geothermal power plant is set, creating an enveloping protective layer as well as establishing the plant’s identity: the “artificial” design cites the natural one in looking for a possible integration between the geothermal plant and the landscape. In addition, the choice of using materials and colours that blend well with those of the hills contributes to the objective of harmonizing the whole while the coppery colour of the Corten alternating with transparent elements is intended to underline the technological aspect of the architectural outer shell.

The joint overall image of the various volumes of the central unit is achieved through the use of repeated materials yet with different forms and functions both in the roof of the central system and in the elements that shield the cooling towers. The large inclined roof of the central system consists of 17 self-supporting Corten steel beams. The first 13 on the west side are 55 metres long and are separated each 2.20 metres by the insertion of rectangular slabs in structural glass.
A lighting system integrated into the roof creates interplays of light and shadow during the day and illuminates the unit during the night. The 4 beams on the east side, on the other hand, are longer in length because they graze the machinery beneath (in particular the last one that acts as a closing element for the whole series and supports the 89 metre-long side wall of the existing plant), and are interspersed with a continuous system of modular metal lattices. The cooling towers are shielded on the short sides by solid panels made of Corten while the west side is clad with a rectangular sheet placed in line with the service stairs and the one on the east side is almost square in shape and interrupted only in line with the connecting piers between the machinery and service stairs that ascend alongside.