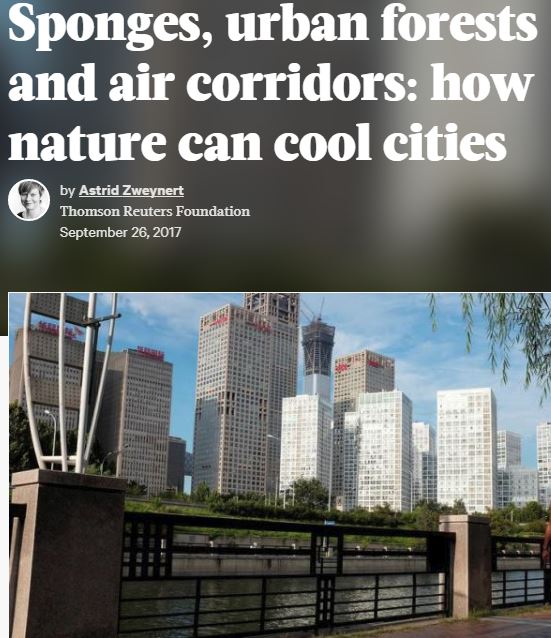 Stefano Boeri and his projects of urban forestation, as Liuzhou Forest City and the Vertical Forests in China and in other countries, are focused in the report about Chinese sponge-cities program, published for Thomson Reuters Foundation by the journalist Astryd Zweynert.
Following the entire article: https://www.zilient.org/article/sponges-urban-forests-and-air-corridors-how-nature-can-cool-cities?cid=social_20171002_74207837&adbid=914913050104291329&adbpl=tw&adbpr=295713773

LONDON, Sept 26th (Thomson Reuters Foundation) – As China battles the twin challenges of rapid city growth and extreme weather, it is adopting a new tactic: turning its cities into giant sponges. Thirty pilot cities in the country are trying to trap and hold more water to deal with problems from flooding and drought to extreme heat and pollution.
The effort, launched by Chinese President Xi Jinping, relies on a range of innovations, from green roofs to buildings to more urban wetlands. It is already being hailed as a bold step to solve some of the environmental problems plaguing the world’s most populous country.
“It is a timely reminder that dealing with urban climate challenges requires a holistic approach” said Sunandan Tiwari, a sustainable urban development expert at ICLEI – Local Governments for Sustainability, a global network of 1,500 cities, towns and regions.

PEOPLE AND WATER
Like many large urban areas, Chinese cities are grappling with both rapid urbanisation – more than half of the country’s population lives in urban areas – and extreme weather, such as severe floods, water shortages and heatwaves.
Both problems can leave more people at risk – but the sponge city effort, launched in 2015, aims to reduce the threats.
The pilot cities have been charged with finding ways to absorb, store, filter and purify rainwater, retain it within their boundaries, and release it for reuse when needed instead of channelling it away through sewers and tunnels.
The cities, including the capital Beijing, Shenzhen and Shanghai, receive funds and practical help to redesign their urban areas in a water-sensitive way, with the aim of turning 80 percent of China’s urban areas into sponges by 2030.
Flood control and water conservation, among other issues, are at the heart of the ambitious push.
But sponge cities have another benefit that looks set to become a major plus as urban areas in China and around the world get hotter: They can reduce the impact of heat waves, which are more pronounced in built-up areas, where concrete and asphalt trap heat.
Trees and other plants absorb water and then release it through evaporation. That creates a cooling effect, in the same way that sweat evaporating from skin cools people.
“Cooling is largely seen as a co-benefit of sponge cities. But with record temperatures in China and many parts of the world, it is becoming a key element in planning for climate-resilient cities,” said Boping Chen, China director at the Hamburg-based World Future Council, a think tank.

GETTING HOTTER
Shanghai, China’s most populous city with 24 million people, baked under a record high temperature of 40.9 degrees Celsius (105 degrees Fahrenheit) last July even as southern China was hit by torrential rain and floods.
Efforts to build sponge cities aim to deal with both problems – and improve life for city residents.
“It’s not just about limiting the damage of flooding, it’s also about coping with rising temperatures, improving urban bio-diversity, better public health and quality of life,” Tiwari, of ICLEI, told the Thomson Reuters Foundation.
Measures taken in sponge cities include covering buildings with green roofs and facades, and creating urban wetlands and trenches to filter run-off water that can be used to replenish aquifers, irrigate gardens and urban farms, flush toilets and clean homes.
The government has allocated each pilot city between 400 million yuan and 600 million yuan ($60 million to $90 million) each year for three consecutive years, and cities are encouraged to raise matching funds through public-private partnerships and other financial ventures, according to a 2017 study in the journal Water.
Lingang, in Shanghai’s Pudong district, has invested 800 million yuan in a 79 square km (30 square mile) area it hopes will become China’s largest sponge city – one that experts say could be a model for other cities lacking modern water infrastructure.
Lingang aims to cover rooftops with plants, create wetlands for rainwater storage, and create permeable pavements that store runoff water, allowing it to evaporate to moderate temperatures.
Shanghai also announced last year the construction of 400,000 square metres of rooftop gardens, alongside other measures to green the city.
“Many of the sponge cities have done really well but it is a long-term task that needs to be done in a systematic way,” said the World Future Council’s Chen.

FOREST CITIES
While China faces formidable financial and logistical challenges to creating sponge cities, Italian architect Stefano Boeri has plans to make “forest cities” in the country.
Boeri, who made headlines when he covered two residential tower blocks in Milan with 800 trees, 4,500 shrubs and 15,000 other plants, has won planning approval to build a forest city in Liuzhou in southern China. Conceived as a green metropolis, the city will house 30,000 people and all its buildings will be covered entirely with plants and trees, said Boeri.
In total, Liuzhou’s forest city aims to host 40,000 trees and almost one million plants from more than 100 species, planted over buildings to improve air quality, decrease temperatures and contribute to biodiversity, Boeri said.
The city is expected to absorb almost 10,000 tons of carbon dioxide – the equivalent emissions of 2,000 passenger cars driven for a year – and 57 tons of pollutants per year. The greenery will also produce some 900 tons of oxygen every year, Boeri said.
He is working with botanists and engineers to create a high nutrient soil mixture able to retain water while still keeping weight to a minimum.
“Bringing forests into the city is one of the most radical and efficient ways to deal with climate change” Boeri told the Thomson Reuters Foundation.
“We sometimes joke and say we’re building houses for trees” he said.
To increase energy self-sufficiency, solar panels on the roofs will collect renewable energy to power the buildings, while geothermal energy – heat and cooling drawn from constant temperatures underground – will power air-conditioning, adding to the project’s green appeal.
Boeri also aims to build vertical forests, similar to the one in Milan, in Nanjing, Shanghai and Shenzhen in China and in other parts of the world.

NATURE AT WORK
While China’s sponge city programme is the most ambitious of its kind, urban planners have embraced nature-based solutions to heat and water worries in other parts of the world too.
The sponge city initiative takes inspiration from the North American concept of low-impact development, sustainable urban drainage systems in Europe and water sensitive urban design in Australia and New Zealand, all of which mimic nature’s water cycle.
The southern German city of Stuttgart, prone to high summer temperatures and air pollution, also has been a pioneer of using nature to adapt to climate change.
Officials there published a climate adaptation plan in 2012, but planners have been thinking about the valley city’s micro-climate as far back as 1938, according to Hans-Wolf Zirkwitz, head of Stuttgart’s Office for Environmental Protection.