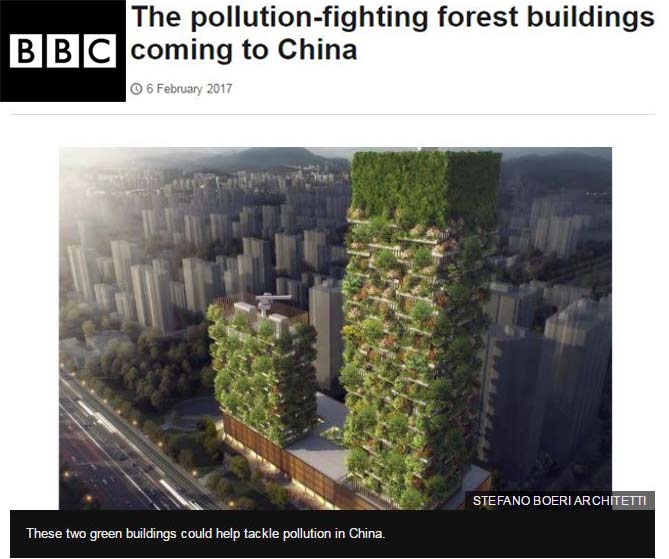 China has one of the biggest air pollution problems in the world.
Lots of people living there tend to wear special facemasks to help to filter out the pollution.

Italian architect Stefano Boeri came up with the idea of creating buildings which are full of plants, to help fight pollution.

These two special buildings will be home to more than 1,000 trees and 2,500 shrubs and bushes which should absorb the pollution in the air and help to filter it and make it cleaner.
The buildings will be built in the Chinese city of Nanjing, and should be finished by 2018.
The shorter tower will be a hotel, while the taller one will be home to a museum, offices and an architecture school.
The buildings are the first of their kind in Asia, but will join two other buildings like them, from Italy and Switzerland.
These two buildings are called the Bosco Verticale towers, and were some of the first forest buildings to be built in Italy.

The architect has plans to build similar buildings in other Chinese cities like Chongqing, Shijiazhuang, Liuzhou, Guizhou and Shanghai.

In 2014 China’s government said they were working hard to reduce the amount of pollution in the air – and since then they’ve been closing down coal-burning factories, and limiting the amount of traffic on roads.