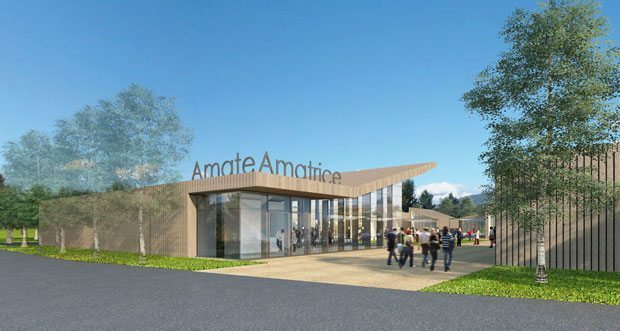 The Milanese architect Stefano Boeri is building two new temporary structures in Amatrice, the Italian town destroyed by last August’s earthquake. The project provides an opportunity for a wider reflection on building itself and on ways of managing a territory which can revive the economy, in the interview by Sara Banti for Abitare.

In China is designing an entire city-forest made up of multiples of his Bosco Verticale in Milan (named the “Best Tall Building Worldwide” in 2015, as well as an airport, other towers and hotels. In addition to the new master plan for Tirana in Albania, he is also working on major constructions in Switzerland, France and Italy. But what the milanese architect cares most deeply about, at the moment, are the wooden buildings under construction at Amatrice, the town that was most badly damaged by the earthquake that struck Le Marche and Central Italy last August. These buildings will form a school canteen with nine modules for catering – as a service for the town’s residents and at the same time a source of employment and hope for 130 people (the initiative has come out of the funds raised by the newspaper Il Corriere della Sera and the La7 newscast).

How did you conceive of these constructions?
We thought immediately about providing the schools with a service space, and at the same time getting the economy back on its feet again. There are two interventions, both connected with food. The first is a canteen for 150 pupils and then there are the nine modular units arranged around a square that will permit the same number of restaurants in the town to resume their activity. All the buildings are made of wood and have expanses of glass that face onto the magnificent scenery of the Gran Sasso.

Why choose wood?
We looked back to the experience of Friuli, where after the quake in 1976 they started to take a different approach to the consolidation of buildings, with extensive use of wood for roofs, floors and partitions.

A change of approach is needed in Central Italy too. The earthquake has shown that the building stock in its present state is not safe.
In the days following the earthquake I visited what was left of Amatrice and the neighbouring villages, which are mostly reduced to rubble. An earthquake is a monster that destroys centuries of life in a few seconds. And it is not something that we can hope is going to go away. This has been a kind of a terrible war in and we can learn from our mistakes. In the Marche I was particularly horrified by the series of extremely heavy concrete roofs that crushed the structures underneath when they collapsed. They ended up on the ground almost intact, with the ring beams of reinforced concrete used in the 1980s which were once considered quakeproof.

The fruit of bad legislation?
The seismic code regulations of the 1980s were completely wrong. In fact they were modified at the end of that decade.

Today you are proposing reconstructing in wood?
Yes, because it has innate earthquake-resistant properties, a very low level of radioactivity and absorbs CO2. It also has a lifetime on a par with other materials that are considered more robust and thanks to treatment in an autoclave its kindling point is higher today and there is no fire risk. Moreover with wood we can build very quickly and thus reduce the time required for construction by a factor of 5 or 6. It is also a flexible, lightweight and modular material. Just as stem cells are able to “construct” different organs of the body, wood with its great plasticity can be used to create a whole structure or just a roof, a wing, a section of a building.

Where did the inspiration for the Amatrice project come from?
From two of our earlier projects, Casa Bosco, an experiment with wooden social housing carried out ten years ago, and Radura, the installation presented at Milan Design Week in 2016 through which I found out more about the Friuli timber sector, now involved in the Amatrice project. We drew on these two models and came up with the idea for buildings that would be temporary but also able to last. This is a paradox that at the same time encapsulates the history of reconstruction. Today it is precisely thanks to wood that we can act quickly but with architectural quality.

We associate a repertoire of vernacular forms with wooden architecture, from chalets to pitched roofs. Is it necessary to come up with a new syntax for these types of objects?
You can do anything with wood – and we don’t have to just imagine a sea of chalets. There are people who have already devoted a lot of energy to the creation of an absolutely contemporary vocabulary of wood, such as Michele De Lucchi. I’m thinking of drawing up a manual with lots of new typologies and methods for construction in wood. What is certain is that rebuilding the town “where it was and how it was” can only be valid for some areas or monuments. The challenge of putting a whole region in order is enormous and we need the courage to make a change in direction. Just as the Sicilians had in Noto and Ragusa, when they invented a new expressive language after the 1693 earthquake, creating Sicilian baroque. Now the solution for a more sustainable kind of building, which goes beyond post-earthquake reconstruction, could be wood. And it’s a broad theme, which also and above all concerns management of the land, care of the forests.

That is to say a more sustainable economy of the landscape?
We need to think of an economy that is at once environmentally sustainable and productive. I have proposed (as something of a provocation) the setting up of a Ministry of Forests because I am convinced that in Italy we are facing an emergency linked to a lack of care for our woods. There is an increase in land use for buildings and other things, and an increasing sense of abandonment of areas of farmland as well as spontaneous afforestation. In other words cities and forests are gaining ground at the expense of certain forms of nature. Going back to cultivating woods would mean exploiting underutilized resources in our country and fostering a circular kind of economy, from cultivation to felling to processing, all the way up to the construction and furniture industries. This kind of regeneration would give a boost to many timber-producing areas like Trentino and Friuli, but not only there.

The management of green lungs and biodiversity is also a problem for many emerging economies.
China no longer produces timber; all their forests have been burnt. This is a dramatic environmental problem. In Brazil deforestation is out of control. We should remember that towns and cities produce 75% of CO2 emissions, but forests are able to absorb 40% of this. This is a big question for the future and a lot of people are talking about it. Milan has put itself forward as a venue for the World Forestry Congress the FAO will be holding in 2021.

You also advocate a new and non-anthropocentric urban ethic.
We often forget that the city is inhabited by other living species. Realizing this and devoting some thought to their needs signifies understanding many other things. One example will serve for all: the recent arrival of a population of seagulls in Italian cities is the result of poor management of the waste cycle and is penalizing many other species.

After the 2011 earthquake a group of Japanese architects sat down at a table and came up with Home for All, a strategy to find a new basis for safer building. Will something similar happen in Italy too?
I have discussed this several times with Renzo Piano. At the moment everyone is doing what he can, but I think that the best place for the coordination of the many efforts under way is Casa Italia, the platform for reconstruction set up by the government. I think we will get there, in the end.