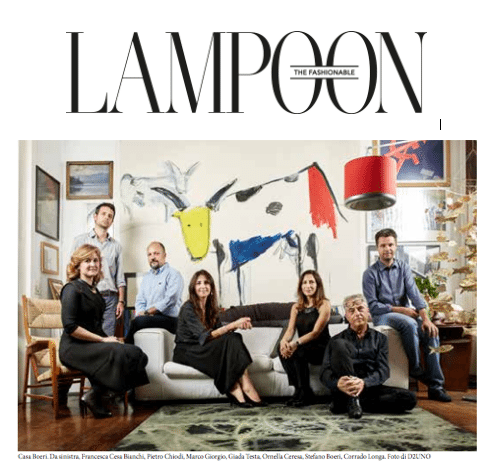 From a photograph to reflect on the concepts of “home” and “common area”. About it, the answer of the architect Stefano Boeri for Lampoon magazine. The shot portrayed him in his house, beneath a white sofa, surrounded by his team of Stefano Boeri Architetti: Francesca Cesa Bianchi, Pietro Chiodi, Marco Giorgio, Giada Testa, Ornella Ceresa, Corrado Longo.
The thought of Stefano Boeri on the house is a little longer and not less poetic of a haiku: “I come home always when I think of Milan. I think in Milan when I look at any other city. I have my home in Milan. A house that sometimes suddenly become the city“. His definition of common space: “A space is public, or common, when that happens there is unpredictable. A marketplace, a steal, a love scene, a procession, a collective prayer, an accident, an encounter in the streets of Italian cities, anything can happen. The common space is a square open to the infinite possibilities of the world“. Behind his back: “A beautiful painting of a painter friend disappeared: Ettore Sguera“. A note on the site reports that the painter was influenced by Goethe’s color theory, that red was the highest color event.