HomeHighlights #fuorisalone2018 lighthenge | an italian ray of light in the sky of global energy.

#fuorisalone2018 lighthenge
an italian ray of light in the sky of global energy. 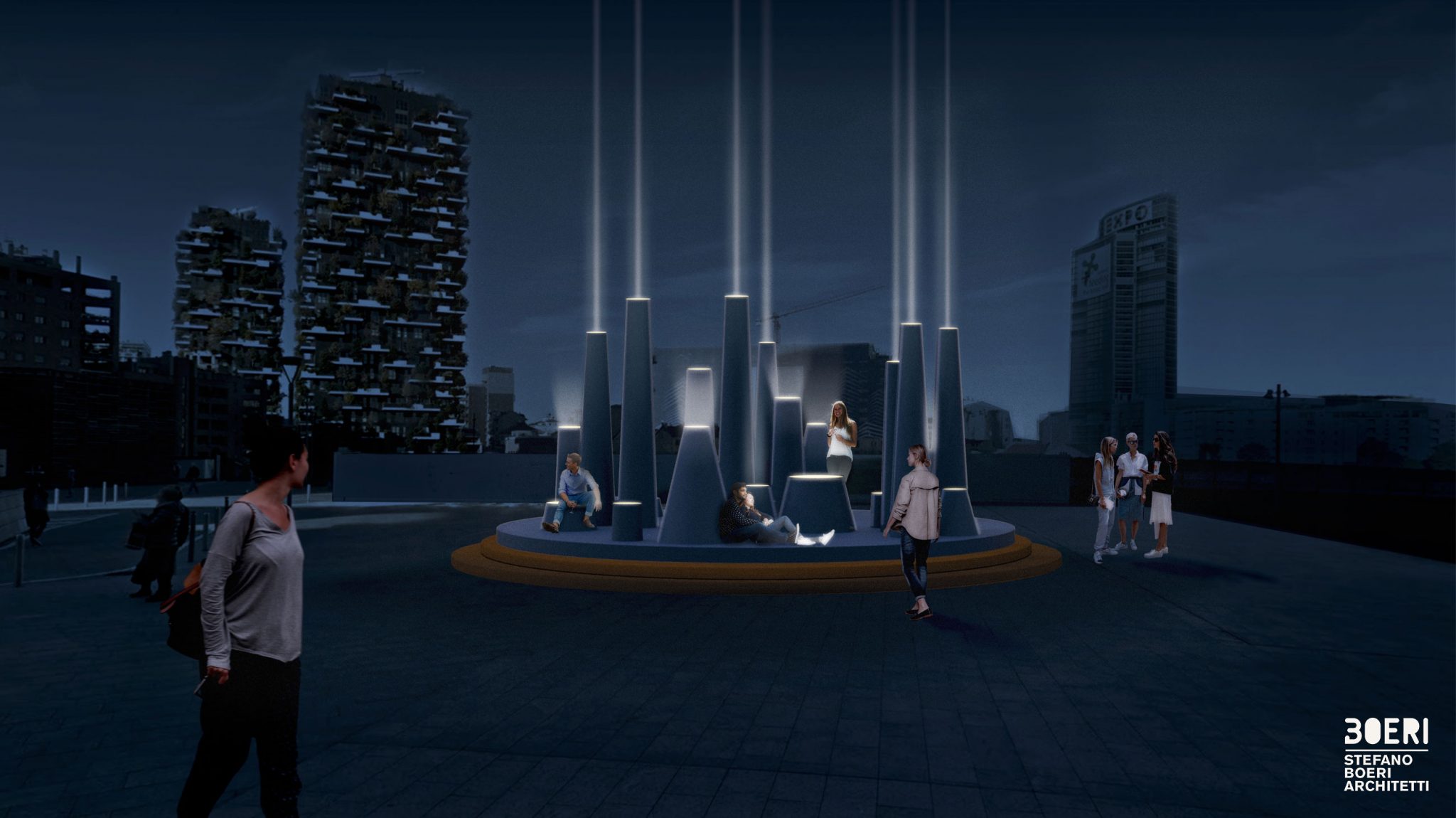 At Fuorisalone 2018 Edison and Stefano Boeri Architetti present a small luminous city that shows the scenic and shareable idea of energy and its wide implications on contemporary culture and society.
Conceived by Stefano Boeri Architetti for Edison for the occasion of the Salone del Mobile di Milano 2018, and staged in Piazza Gae Aulenti, Lighthenge is an urban installation that shows the scenic and shareable idea of energy and its wide implications on contemporary culture and society. At the same time, it acts as a decongestion device, that allows the public to pause and recharge from the frenzy of metropolitan flows. The concept of the project arises from a reflection on key pairs of principles that guide Edison’s business and research, projecting their mission into the future: Energy/Movement, Innovation/Interaction, Respect/Circle, Circle/Sharing, Equilibrium/Sound, Future/Light.
Analogously, the Lighthenge project is formed of a couple of conceptually contrasting elements: a solid base and an immaterial, luminous projection, which adds a comfortable audio soundtrack during the day. The solid portion of the exhibit is made up of a 60-cm high, eight-meter diameter circular platform with a supporting structure in aluminum – which conceals the audio system ‒ and a surrounding wooden step covered with anti-slip vinyl. A small and thick forest of truncated cone-shaped elements in resincoated polystyrene rises from the base (from 40 cm to 3.5 m high and slender in proportion to their height), with places to stop and sit, and disconnect from the context.
Both platform and cones are finished in an intense color of cobalt blue (Pantone 294 C – Deep Cobalt Blue), that confers the total a monochromatic and primordial effect of great plasticity.
The immaterial component of the installation, however, takes form through an unexpected beam of light emitted from each cone every evening beginning at sunset. In the shorter elements, the light, produced by wide sources, rises in contained and diffuse beams from seats covered with translucent plastic. The suggestive visual halos resemble the light of some bioluminescent organisms: Mycena chlorophos fungi of the Hachijo and Bonin Islands, or also (why not?) the plants developed by Glowing Plant, a Kickstarter project that follows in the footsteps envisaged 10 years ago by colossal film ‘Avatar’ by James Cameron.
In the taller cones, in contrast, the energy emitted by the narrow bases manifests as slim rays that furrow the darkness towards the heavens, almost as if seeking to establish contact with far-away civilizations, or perhaps with a more open and luminous horizon of humanity. A solution of great dramatic effect, that recalls the more domestic and common version of the great Tribute in Light that has illuminated the skies of New York every September 11th for the past 16 years, engaging the memories of its inhabitants.
To harmonize the contribution of the diffuse artificial and natural light in a balanced way, the special “circadian” illumination system concealed within the platform allows control and modification of the different color temperatures of the light beam emitted from the LED sources (from blue to orange: 4,000 – 7,000 K°), always guaranteeing the maximum visual impact of the display.

A particular focus of the project was dedicated to placement of the installation with respect to the context of Piazza Gae Aulenti, in recent years increasingly used as the nerve center of encounters and identification among Milan’s new spaces. Specifically, analyzing the dynamics and the perception quality of the location at different times, in both conditions of light and dark, the choice was made for placement in the space between the UniCredit Pavilion and COIMA. This location guarantees lower impact of light pollution produced in the immediate areas, wide visibility and  accessibility linked to flow systems, and a privileged and open point of view towards the nearby park under construction and the Vertical Forest. Consideration with respect to the urban implications of the installation – a type of intervention that is often, to the contrary, developed in a sterile manner with respect to its context – reinforces the sense of the experimental vision and innovation pursued by Stefano Boeri Architetti and Edison. In fact, even more than a form of art, the project offers itself as a miniature urban and cultural metaphor, small abstract foretaste of the city and civilization of the future, able to give form, image and language to that complex universal principle that takes the name “energy”. Daily and without interruption for the six days of Fuori Salone, Lighthenge will act as a control mechanism of the urban energies, able to focus attention on the flows that we continuously pass through and which pass through us, but also to offer an unexpected landscape to abandon oneself to moments of personal stasis, moments when, sometimes, we raise our eyes to the sky.