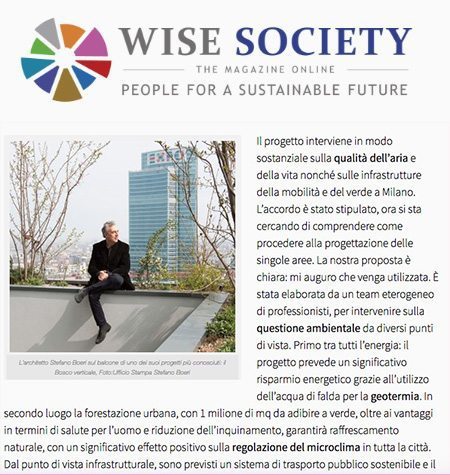 Stefano Boeri in an interview for Wise Society describes his idea of ​​urban forestation and the project  Liuzhou Forest City.  The new urban architecture rising in China will be entirely covered by trees and plants and it will have an energetic self-sufficient system be energetically. It will host 30,000 people, it will be able to absorb nearly 10,000 tons of CO2 and 57 tons of pollutants every year, producing about 900 tons of oxygen. Stefano Boeri explains the green revolution designed by A Green River for Milan: a project of urban reforestation that Stefano Boeri Architetti, together with a multidisciplinary team (Arup, Quinzii Terna Architecture, MIC-Mobility in Chain and Studio Laura Gatti) proposes in response to the consultation “Scali Milano” FS Urban Systems to develop the abandoned railway yards in Milan, transforming 90% of the seven railway systems into a network of uninterrupted parks, gardens, woods, oases and fruit gardens communal uses, linked together by green cycling routes made on railway lines. Talking about city, the architect tells on suburbs. Stefano Boeri‘s interview closed with safety of cities and the initiative Florencecalling, the “Call to Arts” by the Municipality of Florence (following a Boeri’s idea), to design public spaces and counter-terrorism dispositives including green and beauty.